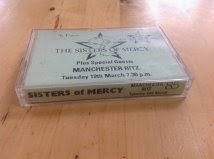 There's nothing better than finding an old box in the garage and finding something which you thought had been lost in a house move many moons ago. The cassette pictured above was my favourite of the many "live" Sisters tapes which I had amassed in the 80s, featuring a particularly impressive performance by the band recorded almost exactly thirty years ago on 19th March 1985 at The Ritz in Manchester on the Tune in Turn On Burn Out tour (to coincide with the release of the much-delayed debut album, First and Last and Always, which had originally been intended to be ready for the Black october jaunt the previous year).
This Manchester gig was of course one of the final dozen gigs by what some consider to be the classic line-up of Eldritch/Avalanche/Hussey/Adams/Marx, before the latter left after a final concert performance in Brighton (thirty years ago today, fact fans). Whatever the (obviously considerable) personality clashes off-stage at the time, the band were certainly on top form on it at that time, as this performance testifies. Even the more insipid Merciful Releases of the era ("Body and Soul", "Possession" etc) have so much more power and drive in a "live" setting, whilst Eldritch's vocal range and imperious control are unrecognisable from more recent bootleg recordings.
Although expensive vinyl bootlegs were beginning to appear around that time, most fans were happy to buy and/or trade cassettes of live performances, with poorly xeroxed paper inlay slips detailing details of the concert and (in this case incomplete) setlist. Openly traded (despite being illegal) at stalls in various markets up and down the country, and reliant on the latest Sony Walkman technology, tapes of cult bands like the Sisters were always in high demand and meant that any obscure encore or classic performance could be quickly circulated amongst the fanbase.
For some, file-sharing technology has taken some of the romance out of tracking down an elusive recording, and the obsession is now with obtaining the best quality loss-less version available, regardless of the quality of the show it represents. But for all the hiss, the sibilance, the sudden major EQ issues, the occasional (or indeed frequent) audience chatter during a favourite song, and the surprise intrusion at the end of the show of a recording of a different (and clearly less popular) band whose "live" show was being recorded over, these old cassettes somehow conjure up more of the real spirit of the Sisters as one of the top live bands of their generation.


Posted by Nikolas Vitus Lagartija at 03:22