One of the strange things about The Sisters of Mercy’s first European jaunt in 1983 (Trans Europe Excess) is that although there seems to be plenty of memorabilia and evidence from one country (Germany, with audio from three of the four gigs – including video for one - plus photos), there seems to be much less available for the Dutch leg of the mini tour. Naturally, for the Amsterdam Paradiso gig, the last gig of the four, there is plenty to be found, including superb audio recordings and the following review which was published in West Yorkshire fanzine Whippings and Apologies. 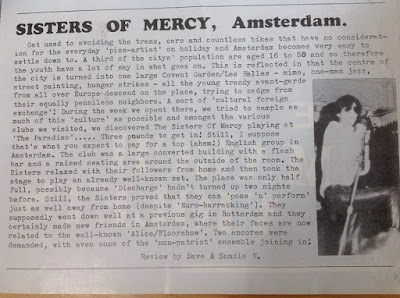 But for the others, very little evidence remains. In fact, no tickets, photo or audio have surfaced for the gig at the Effenaar in Eindhoven on Friday August 26th 1983, although a copy of the legendary poster (with the band’s name on the back of a leather jacket) was sold on Ebay some years ago for a mind-boggling price, whilst for the following evening’s show at the Rotterdam Arena, only a poster advertising gigs that month (listing the Sisters as “pop uit Engeland”) under a much larger advert for Jo Lemaire (who was to support the band in Genk two short years later) has materialised.

The first gig of the tour, and the first indoor Sisters gig in Europe, is much better documented, partly because the venue, the Vera in the northern university city of Groningen, is still very much thriving today, and on its website can be found the results of their annual poll of gig-goers nominating their favourite concert of each year. As can be seen below, the fledgling band came in a very respectable fifth place, well ahead of Sonic Youth, Killing Joke and The March Violets (down in 29thplace), and indeed one place higher than their gig at the same venue the following year managed in the 1984 poll. 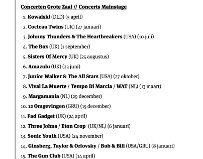 Whilst a recording of the 1984 concert has been in circulation for many years (including the infamous soundcheck which included the likes of Heartbreak Hotel and, many years before Von would finally have the courage to sing it ‘live’, Stop Draggin’ My Heart Around), unfortunately there was no audio recording of the ’83 gig, although one collector has unearthed the original poster for the gig.

The Vera itself is something of an institution in Groningen, with its distinctive fish carving above the door, and was founded as a debating club in 1899 according to Dutch Wikipedia, and was an acronym of the Latin for “true and sincere friends”, becoming a more left-wing youth centre in the 60s and 70s. TSOM returned to Groningen on their thirtieth anniversary tour in 2011, playing at the much larger and more modern Oosterpoort. 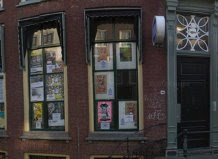 Posted by Nikolas Vitus Lagartija at 11:55 No comments:

As we have seen in recent posts (particularly covering the Plan K alleged gig in Brussels), one of the biggest difficulties for TSOM aficianados trying to piece together the early 'live' history of the band is the lack of precise information available, even in these days of the internet and social media.
It's even harder when the gig took place at a tiny venue in a small town, and with a population just a couple of thousand shy of Retford's 20,000, Colne in Lancashire wins the accolade for the smallest town visited by the band on their early peregrinations across the UK, with the band stopping off to play in the Franc's club (allegedly named after the owner manager) in March 1983. Various other bands also played there on tours around that time (including King Kurt, New Model Army, Skeletal Family and the touring Batcave evening), but the precise date for the gig remained a mystery until recently, with two dates circulating, Monday 14th and Saturday 26th March.
It has become apparent that the former date was entirely due to the date on this pass :

which a fan had in his collection. However, the current owner of the pass, French TSOM specialist Phil Verne has been in contact with the original owner, and as the club was members only, this pass was in all likelihood issued in advance and the date marked on it was not necessarily the date of the gig. All other tour adverts and listings at the time, including the dates read out on The David Jensen show on Radio 1, indicate that the gig actually took place on Saturday 26th.
Unlikely corroboration for the gig having taken place comes from well-known anti sex abuse campaigner and Rochdale MP Simon Danczuk, who last year had the following Twitter exchange with former Word presenter Terry Christian amongst others :

Danczuk confirms that he saw TSOM at the venue, which he correctly describes as being on the corner of a shopping street. The two floor 250 capacity venue has undergone many different name changes over the years since the TSOM gig there, and was for a long time known as Zebras nightclub. These photos give some

indication of the size and location of the venue next to a pub, as does this one earlier this decade in the short-lived guise of the T3 club, before it became The Sugar House a couple of years ago, a name it retains to this day. 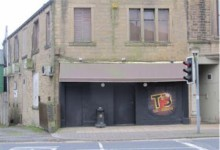 Having recently commemorated the thirtieth anniversary of the departures from the band of Gary Marx then Craig Adams, it would be churlish (temptingly so) to fail to do the same for Wayne Hussey, one of the dozen or so guitarists who have been members of the band over the past thirty-five years.
In terms of longevity, Hussey would barely make it into the top ten TSOM guitarists, having survived a mere eighteen months in the band, but his absence still casts a shadow over the band today for many fans of that era, particularly those whose love affair with the band started with First and Last and Always.


Leaving aside (for now) the bitter circumstances of his departure, Hussey was always a polemical figure amongst Sisters fans. For those who had followed the band closely throughout 1982 and 1983 (the Ben Gunn years), the era of blistering love performances and the “golden run” of Merciful Release singles topping the independent charts, there were already suspicions of the band’s direction now that a major label deal had been signed, and the recruitment of Hussey hardly served to allay these fears. The guitarist’s recent past as a seemingly willing clothes horse in Dead Or Alive’s ever more desperate attempts to crack the charts certainly didn’t help to convince any doubters, but neither did the first release from the new TSOM line-up (the insipid Body & Soul) nor his growing presence in interviews and live shows. Whereas Marx and Gunn had been happy for Von to do the talking, and had shyly kept their distance from the media, Hussey relished the limelight and seemed to have a growing influence over events, with Eldritch’s health apparently beginning to decline. 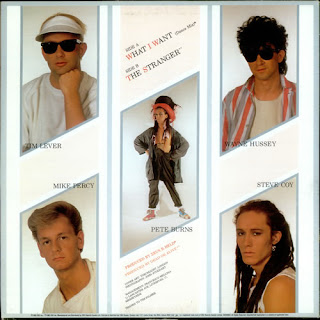 The same was true at gigs, with Hussey happy to flirt with the audience and mingle freely with the fans before and after shows, never far from a bottle of wine, seemingly breaking down some of the mystery and mystique his leader had deliberately created and indeed increased during that era, with the introduction of hats, dry ice, more subtle lighting etc.

Worse was to follow, with some blatantly chart-friendly compositions (Walk Away, for example) a far cry from the Reptile House and Floorshow days. Tensions within the band inevitably came to a head, and it came as little surprise to many that Marx (his role and influence diminished) left the band, shortly followed by Hussey and Adams. Eldritch had always made it clear that TSOM was effectively his band (with Marx seemingly willing to play a secondary role), but Hussey’s increasing dominance and apparent megalomania meant that a parting of the ways could not be avoided.

In the war of words which followed, I found myself clearly in Von’s camp, and was delighted that he won the battle for the band’s name. As much because of Craig Adams as anything, I tried to like Hussey’s new band, but found the predictable melodies and vacuous lyrics not to my taste, although they quickly built up a sizeable following which they retain to this day. I found the live spectacle even less palatable, the turgid, bombastic music matched by the over-bearing self-congratulatory pact between singer and audience, as he eagerly lapped up the adulation he had always craved. On both occasions I saw them (Sheffield Uni, November 1986 and Birmingham Hummingbird, March 1988) it was the support band (Rose of Avalanche and Red Lorry Yellow Lorry respectively) that stole the show in my (admittedly minority) opinion, and I have not been back to see them since.

Over the years, my opinion of Wayne Hussey has mellowed significantly. He now seems to be a sorted, humorous guy who respects the fact that the fans have stood by him, and his song-writing and singing have both improved, to the extent that I enjoy watching clips on YouTube of recent solo tours. And I’ve even revised my view on his time in the Sisters. Although a major disappointment to me at the time, FALAA is still an excellent album by most standards, and in Marian he contributed significantly one of the band’s signature songs. Subsequent revelations about Von’s health and working practices in the mid-80s might also lead one to a more generous appraisal of some of Hussey’s decision-making at the time, and he himself probably had demons which were also an influence on his actions. TSOM's subsequent releases and media game playing (particularly in the Floodland era) also helped me to cast Hussey less in the role of pantomime villain.

All that being said, however, I can't imagine any circumstances in which I'd like to see him back in TSOM, and there's more chance of Mrs L convincing me to go and see Blood Brothers the musical than me going along with old goth pals to see The Mission.