This is the final post of a trilogy about The Sisters of Mercy's Scandinavian gigs in 1985, following on from posts about gigs in Gothenburg (here) and Oslo (here). 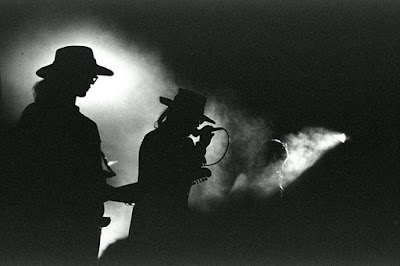 The Sisters of Mercy’s final mainland European gig of the 1980’s was a memorable affair, and marked their return to the scene of their first ever Scandinavian gig in October 1983, Stockholm. On this occasion they had been upgraded from the smaller BZ club to the larger Kolingsborg venue (anglicised to Colinsburg on the band's own tour itinerary), an interesting landmark marooned on a complex multi-level multi-modal traffic island (with trains and a canal running below!), well-known to anyone familiar with the Swedish capital city in the second half of the twentieth century. 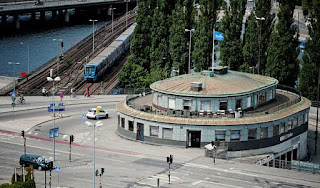 Whilst the Electric Garden gig some eighteen months previously had been the first (and indeed only) European gig after Ben Gunn left and before Wayne Hussey officially joined the band, the Kolingsborg concert, as the final date on a gruelling forty-five show UK and European tour, would turn out to be both Hussey and Craig Adams’ final continental show with the Sisters (although both of course featured in the Royal Albert Hall gig a month later, following the American leg of the tour in early June 1985).
The strains within the band at this stage were reaching crisis point, and the end of the tour seems to have only exacerbated the situation. It’s notable for example that Eldritch was missing from the opening ten minutes of the Press Conference held on the afternoon of the gig, with the other two band members left to field the first ten minutes of questions from the largely hapless Swedish journalists, who had clearly been expecting to be fed information (i.e. expecting some prepared band statement, as is often the case at a Press Conference) rather than having to elicit it themselves with detailed questioning. The lengthy embarrassing silences that punctuate the Conference (the band’s second-ever, following on from the Rome event earlier on the tour) make for an excruciating listen, with the constant whirr of camera flashes only adding to the band’s discomfort. Eventually, the group was coaxed outside for some very awkward looking photos, blinking in the Stockholm sunshine as in the example below (kindly supplied from LG's vast collection). 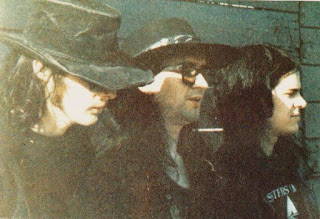 Other rumours have circulated since about the gig, notably around Hussey and Adams’ alcohol consumption as they marked the end of what had been a particularly fraught European tour, covering long distances and effectively playing with one man down after Marx’s sudden departure on the eve of the tour. One account has Hussey being physically sick in the DJ booth at the Kolingsborg venue, another (apparently from the horse’s mouth) has both Hussey and Adams being arrested by the police and being forced to spend the night (after the gig) in the cells to sober up – very rock’n’roll! 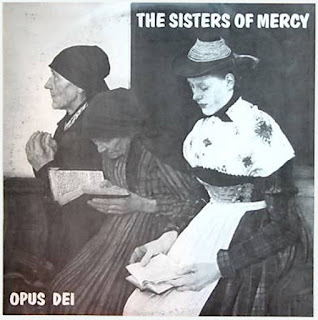 What is certainly true is that (for the only time I am aware of) the internal band strife momentarily spilled into their performance, with an angry Von snapping (at Hussey?) half-way through Gimme Shelter “This time get it right [then half-singing to keep the song going] Sister….After forty nights, he still f****ing gets it wrong”, before recovering his composure to complete the song. The large and enthusiastic audience also seemed to evoke the singer’s wrath, chastising one whooping fan with “You don’t know what it is yet, chicken sh*t” over the opening backbeat of Gimme Shelter, whilst another, who requested 1969 was tod that he was "Sixteen years too late"! Apart from the fact that it was a Friday night, part of the reason that the audience was so welcoming was the fact that they had enjoyed the rare privilege on this tour of being treated to a support act (the local synth-based group “Houses and Gardens” who had their only single out on UK-based Wire records at the time). The crowd would have been unaware of these tensions however, as the concert enjoyed a fine acoustic in the round Slussen venue, and a recording of the show, initially released as a bootleg vinyl under the name of “Opus Dei”, is widely regarded by collectors to be one of the finest. The two months on the road had enabled the band to perfect the songs from FALAA and the likes of Amphetamine Logic, Possession and A Rock And A Hard Place sound a lot more potent here than on the vinyl studio versions. The band even treated the Swedish audience to a final encore of Ghostrider, an occasional "extra" on this tour, with Craig in particular reluctant to leave the stage, playing his final three notes slowly and repeatedly after the rest of the band (including the Doktor) had finished before finally departing. The whole concert (most likely from the “Trans-Europe Excess” bootleg CD recording) is now available for all to enjoy on YouTube. 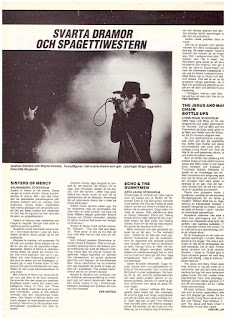 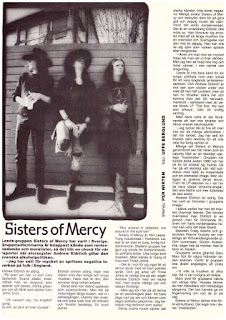 Whereas most shows on the tour went unreviewed, both an interview from the Press Conference and a review of the Kolingsborg show (above) were published in the Swedish rock magazine Schlager (kindly rediscovered, shared and translated by Anders R), with impressed journalist Per Wirten waxing lyrical on the band’s “black, dramatic songs”, their imagery, and the knowing way that they controlled and drew in an audience. The article was accompanied by a photo taken by Uffe Berglund, one of many photographers there that evening, as the selection of photos below from the collection of hardcore TSOM collector LG (and previously shared on the fantastic (unofficial) TSOM 1980-1985 Facebook Group (all welcome!) will testify. 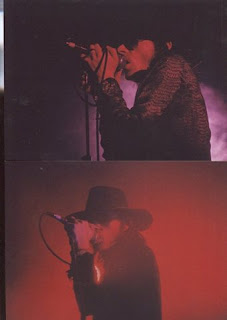 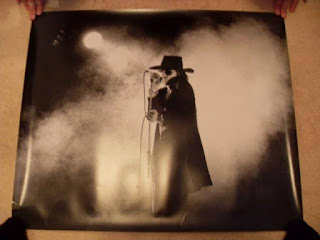 Although this wonderful poster advertising the event is still in existence, the iconic venue itself, originally built as a harbour offic,  has recently been demolished, having subsequently served as a gay nightclub and even an architect’s office. An excellent English language blogpost details the venue’s last days, when it was used as an art project prior to its controversial demolition in 2016. 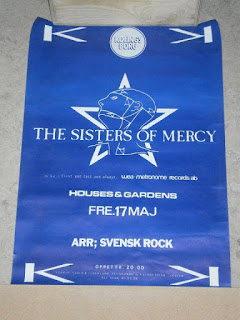 Given the popularity of the band in continental Europe (“now as then”), it’s entirely fitting that the final mainland show by the remainder of (arguably) the most iconic of The Sisters of Mercy's various line-ups is so well-documented, mainly thanks to the usual group of inveterate collectors and historians who strive to keep the band’s legacy safe : Phil Verne, LG, Bruno Bossier, Anders R and the many others – we salute you!