When I started this blog towards the beginning of this decade, my aim was to shed a bit of light on what life was like in Leeds in the early 1980’s, so that The Sisters of Mercy fans from other cities or countries, or those who had only discovered the band more recently, might have a better understanding of the context in which the band was formed and developed. Ignored by mainstream media or derided (along with the rest of the goth “movement”) as a joke, it seemed as if future generations would only have TSOM’s records and the few surviving Eldritch interviews to try to piece together the band’s rationale and genesis.

Unlike other Northern British cities (in particular those on the other side of the Pennines), the typically modest and self-deprecating Leeds character had discouraged any belief that the wider world might have an interest in what was happening in ther city in the post-punk era when its bands were (albeit briefly) at the forefront of British cultural life, developing a unique musical and political aesthetic that continues to fascinate to this day.

Over the past five years, however, a variety of high-quality works have sought to correct the imbalance in this regard (compared to the scenes of Liverpool and in particular Manchester), more searingly honest and less self-congratulatory in tone than those examining other cities. In particular, there’s been the Sound City documentary, Mark Andrews’ articles for the Quietus (and more recently Dave Simpson’s piece in the Guardian), the recent volume reprinting the issues of seminal contemporary Leeds fanzine Whippings and Apologies, Wayne Hussey's autobiography and a series of self-published tomes by former Leeds resident Richard Rouska, the latest of which, “It Ain’t Peters and Lee – The Leeds rock, pop, punk, new wave and indie scene 1977-87” has just been published. 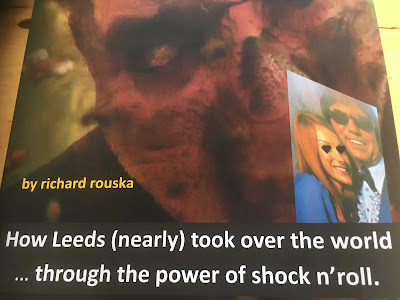 Leaving aside the dreadful title (and cover), this latest work is wonderful treasure trove of detailed information about what was happening in the city over that crucial eleven year period, presented in almanac form, taking one month at a time. Amongst the train-spotter facts – for example, the list of gigs in the city which appears at the end of each month’s entry – there are mini pen-portraits of pretty much every band on the scene, however successful or short-lived, detailing the band’s members, their record releases and a brief but honest appraisal of their place in the overall scheme of things. For those not intimately involved in the Leeds scene at the time, much of this information will be of little intrinsic interest, but it does show the vast array of different musical strands being developed at any one time, and will be of real interest to future researchers into the Leeds scene.

There are also highly readable mini-essays and opinion pieces throughout, about the crucial role of promoter John Keenan, for example, or the relative merits of other fanzine writers. In many ways this is where Rouska is at his best, as was always the case with his own fanzine which he ran in the city in the mid-80’s before launching his own record label which notably brought goth/EBM legends The Cassandra Complex to a wider audience. Possessing tremendous drive and enthusiasm, Rouska carved himself a central position in the Leeds music scene and his knowledge of that era is unrivalled. Through his contacts at the time, he even got to perform (as a punk poet) between the bands at the 1984 York Rock Festival.

But what about The Sisters, I hear you ask? Rouska has always been aware of his potential market, and therefore TSOM do indeed have a central role in the book. Using rarely seen but excellent Steve Drury photos, Rouska charts the familiar chapters of the band’s history in the appropriate months (see the example below quoting this very blog), helpfully listing at the end of each entry when the band next appear in the book. Although very few new facts about the band emerge, there are many insights into Eldritch’s character from those who knew him at the time, plus little-known quotes from reviews from the contemporary independent magazine Leeds’ Other Paper (LOP), a periodical which I must confess I never once read during my years in the city.

Rouska also gives prominence to other bands on the 80’s scene, from Red Lorry Yellow Lorry to The Rose of Avalanche, and the earlier bands (GO4, Mekons, Delta 5 etc) are also covered in appropriate detail. Other well-known local bands who were unheard of outside of the LS postcode area (e.g. Xero Slingsby, The Prowlers etc) are also recorded for posterity in the book. But again, it’s in the analysis of the scene that Rouska is at his strongest, as he builds a convincing picture of what was a very fragmented scene where people stayed within their own circles rather than it being one big happy post-punk family, which is very much how I also personally remember it.

Inevitably, some will find this labour of love a little disjointed given the almanac approach, or quibble with minor details (there are a couple of common inaccuracies regarding the Sisters for example), but these two hundred and twenty pages of densely packed information create a real sense of the reality of life in Leeds in the decade under discussion, and this book is an essential purchase for those with an interest in the Leeds music scene at that time whilst further whetting the appetite for Mark Andrews' forthcoming biography of the early years of The Sisters of Mercy

It Ain’t Peters & Lee is available directly from the author’s own website for £15 (with free p and p for UK purchasers). Mine arrived within three days so you can order with confidence!


Posted by nikolas vitus lagartija at 05:31 No comments: