One of the lingering issues at gigs for post-punk bands, along with the occasional "spitter" trying to recreate 1977, was the unpleasant presence of Nazi skinheads. Mark E Smith, famous for performing with his back to the audience, was not averse to jumping into the moshpit himself to sort out such unwelcome guests, and your humble scriobe was present at a Siouxsie gig in Derby in 1981 when, fed up with being heckled by a handful of Nazi punks, she returned to the stage resplendent in her "Israel" gold Star of David t-shirt. That shut them up.
The most infamous incident of this nature at a Sisters gig took place on the Dutch leg of the 1984 spring tour at the De Kapel club in Maastricht on the 6th of June (D-Day !), the night after the legendary Nijmegen gig featured in a recent post on this blog. Possibly as a result of over-indulgence the night before, the gig was not one of the band's best, featuring more bum notes than usual and some over-lengthy pauses between songs, as can be heard on the recording of the gig kindly uploaded onto YouTube by a friend of the original taper ("Hubert").

The incident of note takes place towards the end of the gig, at the end of Ghost Rider/Louie Louie when Von announces at the end of the main set "Unfortunately, we don't really feel like coming back and singing some more, whilst this man's got that t-shirt on. So until he takes it off, we're going." There then follows some audible"Sieg Heil"ing from the individual in question, roundly booed and whistled by the crowd. Von is then heard to say"We really don't want to hear any more about "white power", thank you. We just want you to take your shirt off". There then follows a huge cheer from the crowd, followed by more booing as the stand-off continues. Whilst this episode takes a few minutes on the YT version, on the original master it is an incredible 23 minutes between the end of the main set and the start of the encore, which says much about Von's principled stand and the crowd's patience. When the situation is eventually resolved, Von returns to the stage saying, "Sorry about that", before Craig launches the riff for quite probably the best ever rendition of "Fix", the lyrics seeming more appropriately ironic than ever as Von passionately spits them out. The incident was later mentioned by Adam Sweeting during a Melody Maker interview with the singer published later in the year, which gives more detail about the offending t-shirt.

Like many of the venues of that era (rather than today's custom-built barns), De Kapel itself had an interesting history. The gig poster above (another one kindly submitted by Belgian completist Bruno Bossier to the Sisters wiki) gives the venue as Capucijnengang, and the combination of monastic order street name and the venue name ("The Chapel") would lead a TSOM venue pilgrim to believe that this building :

which dominates the short street and is clearly no longer operating as a chapel, was the venue. However, the poster gives the address as "no. 3" whereas the fine whitewashed ex-chapel above is at no. 6 Capucijnengang. The real number three, although a fine old stout terraced mansion, would seem to be an unlikely gig venue, as this picture would suggest :

Catalogues of historic monuments in Maastricht (you can get a glimpse here of the fascinating life I lead) list no 3 Capucijnengang as the first home of the Jesuits in the town, an order known as (what translates as) "The Brothers of Masstricht" (a good name for a tribute band ?). In the second half of the nineteenth century, behind this rather unpromising and austere facade lay an enclosed courtyard in the traditional Low Countries style (like the famous Begijnhof in Amsterdam) containing a boys' boarding school and, of course, a chapel. The order was not immune to the gradual fall in numbers across the Christian faith in Western Europe in the post-war years and by 1968 the order had no need of its large premises any more.
According to my research, a 1960's Jesuit priest, noting the lack of facilities in the city for local youths, started a club for young people at the premises known as the Kombi, and as the 70s turned into the 80s this had become the major gig venue in town, where many post-punk bands played. In the early 80s as the Kombi came to an end, the venue lived on briefly under the name De Kapel, after the large former church (built in 1881) which dominated the site, and can be seen on the right of this archive rooftop shot of the series of rooms at the back of number three.

Sadly, however, the venue did not last much longer, and like many other previous TSOM gig hosts, the elegant chapel has now been fairly sympathetically converted to some rather swanky flats, with the buildings to its left (above) replaced by some rather brutal and architecturally inappropriate new flats no doubt intended to hark back to De Stijl but which would have Prince Charles in apoplexy. 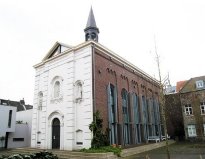 The private courtyard can be reached through wrought iron gates by number 7 Capucijnengang, but sadly there is no blue plaque acknowledging its place in the town's - and The Sisters' - history.


Posted by Nikolas Vitus Lagartija at 14:28 No comments:

In the early days of Britain's membership of the EU (or EEC as it was called in those days), there was much talk of over-production and resultant metaphorical "wine lakes", "butter mountains" and the like. There was never any mention however of a "brick pile", probably because they had all been used to construct the erm, unique entrance to the Limburghal in Genk back in 1971, the second and final stop on TSOM's mini Belgian tour of 1985.

Unlike the magnificent medieval splendour of the previous night's stop in Gent (a mere 54 kilometres away, according to this extract from the official tour schedule courtesy of Phil Verne), Genk could not have been more of a contrast, a "town" which (like Stoke on Trent, for example) was more of a collection of villages which grew up suddenly with (in this case) the discovery of coal, in the latter stages of the Industrial Revolution. Although the coal-mines had gone by the early 80s, Genk still had one of the largest Ford Motor Company factories in Europe (as it did until last year in fact), but the local council clearly felt that the locals needed cheering up, and so arranged a "Spring Festival" in the context of "De Jaar van de Jeugd", as can be seen on the poster below, kindly shared by legendary collector Bruno Bossier on the Sisters wiki website. I'm not sure that the United Nations had goth gigs in mind when they'd designated 1985 as The International Year of Youth, but the promoters of the Genk festival must have been delighted that TSOM's Armageddon itinerary brought them to the right place at the right time, to headline a bill that can only be described as eclectic, all introduced by an enthusiastic female compere.

First up were Walloon dark-wavers Poésie Noire, promoting their first EP Gioconda Smile, just starting out on their career but probably the only band on the bill with any connection at all to TSOM, as they later became one of the first bands (of many) to cover Marian, on their 1989 Oblivion EP (along with songs by The Cure and The The). They were followed by another new wave act, local heroes Nervous Night Gang, who managed just one 12" EP in their brief career, before the Festival got a little stranger. As their name would suggest, Seven Roots were a reggae band (well TSOM had shared a bill with Aswad earlier in their career), led by one Prince Bert and promoting their latest single, "Let's Do It". I suspect that they were about as popular with the crowd as Prefab Sprout had been in Lier the previous year, but sadly I have been unable to track down a contemporary review. It would also be interesting to know how the audience reacted to Factory Benelux artists Cosa Nostra and to Jo Lemaire, a chanteuse whose career would span a further thirty years but who at the time was going through a trendy phase, with a change of direction and a self-titled album produced by TC Matic's guitarist.
Posted by Nikolas Vitus Lagartija at 08:00 No comments: