Probably the most gothic venue that TSOM ever played at, Middlesbrough Town Hall, was the second stop off on the Spring 84 tour, and Wayne Hussey’s third UK date with the band. The Town Hall, typical of post Industrial Revolution northern civic architecture, was officially opened by the then Prince of Wales in 1889 (the year the Eiffel Tower opened) and was widely regarded as one of the best examples of the French Gothic revival style in Yorkshire. Some ten years prior to the Sisters’ visit in 1984, Middlesbrough had officially ceased to be part of God’s Own County and was at the time of their visit formally part of the new (but subsequently abolished) county of Cleveland. 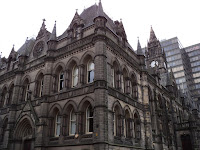 The Town Hall, which is being lined up for an £8m revamp next year, features two music venues, the smaller, 300 capacity low roofed Crypt, and the main hall, which can hold more than four times as many. With its plush red seats, arched windows, and (appropriately for the town which provided much of British Steel) wrought iron roof struts, the sumptuous Main Hall is used for everything from weddings to graduations as well as concerts. The Town Hall (see more photos of the magnificent interior here ) is one of the few 80s venues with a recent Sisters connection, with Chris Catalyst having played there in his Robochrist days in 2005 as part of Middlesbrough Music Weekend, shortly before he joined the band.

Various artefacts have surfaced from the Sisters gig at the Town Hall, including this poster (like many other promoters, the Teeside Poly – now University – Students’ Union who organised the gig omitted the definite article in the band name) which I am very grateful to legendary Sisters collector LG for allowing me to share here :

and several tickets, including a signed one on the Sisters’ wiki (a photo kindly provided once again by Bruno Bossier) and this one, number 1027, which proves that the band could draw a decent crowd by that stage.

A recording of the gig (which like many of that era began with Burn and ended with Ghostrider) is widely available on the internet, but despite being of reasonable sound quality, it wasn’t a vintage performance, for reasons which became clear only recently. Writing to Heartland Forum Admin Quiff Boy, Gary Marx explained that the gig was the first he played without his trusty Shergold Maquerader guitar. For reasons which remain unclear, during the encore of the first night of the tour at Nottingham’s Rock City (where the band is to return in a fortnight), Marx “started smashing the guitar to pieces against the stage and the monitor wedges….The next day, the tour bus detoured (en route to Middlesbrough) through Leeds and stopped off for me to buy a second-hand guitar from a pawn shop on Boar Lane. Apologies to anyone at that gig – it was possibly the strangest sounding electric guitar I have ever heard. I can only assume that I borrowed guitars for the remaining days.”

If Middlesbrough Borough Council are looking for a suitable act to re-open the Hall after its forthcoming refurbishment, they could do far worse than contacting Mr Catalyst and getting TSOM back to the grandiose arena – with a proper guitar sound this time.

(As usual, my thanks to all those who have helped – wittingly or unwittingly – to provide the detail in this post, including Phil Verne, LG, Bruno Bossier, QB and of course Mr Marx himself)

Posted by Nikolas Vitus Lagartija at 13:55 No comments:

Another candidate for smallest audience for a Sisters gig would be a further 1983 gig, that on 27th April  at Swindon's Solitaire club. Swindon, famous for its connections with Brunel and the Great Western Railway, the infamous traffic Magic Roundabout and an enormous Honda factory, has a population almost ten times that of Retford, but the Wednesday night gig by TSOM at the Solitaire venue drew only a small crowd. Fortunately amongst those who were present was stalwart Sisters fan Simon Clifford, who says "I don't think that there were that many people at the gig, 30 at the most I would say." For many years there was a doubt that the gig had even taken place at all, until Simon generously shared his recording of the gig with the MyHeartland community of Sisters fans, and listening to that recording,

the small smattering of applause that follows each track gives a strong indication of the size of the gathering.
The venue itself was not a natural choice for a goth gig. As Simon recalls, "The venue was fairly small and was more of a nightclub than a concert venue. I can't remember if there was a support band - if there was, they obviously didn't make much of an impression on me.I only went to the Solitaire for two gigs, the Sisters being the first, and Xmal Deutschland was the second a few months later. The most interesting thing about that gig was that Liz and Robin from the Cocteau Twins were in the audience." A further indication that the nightclub had not really grasped the kind of clientele its series of alternative gigs would attract can be seen in this picture of a Hanoi Rocks gig there in 1983 which I found on the net (no tickets having surfaced from the TSOM gig). 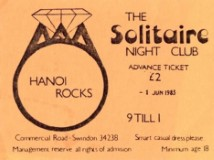 The "solitaire" diamond ring logo hardly seems apt for a rock club, and the request that patrons wear "smart casual dress" might be judged a tad optimistic. Perhaps this clause and the management reserving the right of admission might account for the relatively low number of attendees at the Sisters gig! The gig itself saw the band rip through a familiar setlist, Von bigging up the then forthcoming Reptile House EP after "Burn" in his only real onstage comment, the rest of the songs following on from each other after only a few seconds left for the enthusiastic but unsustained applause from the small crowd. Even adding in the misfiring start for encore Body Electric, the whole gig weighs in at under 40 minutes, certainly not the longest they played that year, but the versions of Jolene, Floorshow and Gimme Shelter towards the end of the main setshow that the band could always rise to the occasion even if crowd numbers were disappointing.
Visitors to Swindon today would struggle to find the venue, as it has changed hands - and name - many times since. Like many of the other TSOM venues in 1983, it was in fact a part of a pub complex, in this case the Rolleston Arms in central Swindon.

A popular traditional pub built in 1890, the 300 capacity basement accessed via a separate entrance (under the red sign to the left of the picture) was the location of the Solitaire Club in the 1980s. As this BBC News article shows , the venue briefly hit the headlines two years ago when it closed shortly after an ill-fated revamp from the much-loved "The Furnace" rock club to the unsuccesful "Basement 73". After a period of uncertainty, the venue has reverted to its' post-Solitaire and pre-Furnace name, "Level 3", and hosts a fairly broad range of rock bands, many of which are tribute acts. If ever Ben Christo reactivates NightxNight as a touring band, he could do worse than seek out this dark and sweaty historic venue which rightly has a place in The Sisters' history.

(I would like to record my special thanks to Simon Clifford for his assistance with this post, and for sharing the reording of the gig. Not for the first time, I would also like to thank legendary archivist Phil "spiggytapes" Verne for his advice and support, including the extract from the contemporary NME gig guide above. Sounds like an interesting night in Sheffield - Leo Sayer or The Angelic Upstarts !)

What was the smallest audience the Sisters ever played to ? Unfortunately, there are few eye witness accounts from the every earliest gigs in 1981, and those that there are tend to be very sketchy on details such as the size of the crowd.
There was of course the infamous gig in 1992 in the front room of competition winner Sabine Retz in Oberhausen, Germany (I remember being relieved at that time that I was not the "lucky" winner of the UTR subscriber prize draw and therefore did not have to submit the relative squalor I was then living in to a worldwide audience), but for regular gigs it would be hard to beat the tiny gathering at Retford's Porterhouse venue several months after Alice/Floorshow when the band had already been Sounds cover stars.
The tiny Georgian market town of Retford might be on the East Coast mainline of the UK railway system, but the sleepy North Nottinghamshire market town was a culture free zone before becoming famous in the 70s and 80s for the Porterhouse. The venue became a stop off for all up-and-coming bands making their way in the UK, and far more famous bands than TSOM (e.g. U2, AC/DC) also played there. The club was owned by the enterprising South Yorkshire businessman Sammy Jackson, and was situated on the pedestrianised Carolgate right in the town centre. Operating over two floors, the club hosted bands upstairs at weekends whilst DJs spun the usual chart fodder downstairs for the TopShop masses (on the same night !).
Generally speaking, the Porterhouse was a massive success, so much so that Jackson was able to scrape together the finance to launch Rock City in nearby Nottingham, which with similar excellent promotion and attention to detail has become one of Europe's top venues, and celebrates (like TSOM) its own thirty-fifth birthday this year.

The night TSOM played at the Porterhouse (a Saturday), 12th Feb 1983, must have been a real disappointment to Mr Jackson, however, as the two reports which have surfaced will testify. One fan, who posted their reminiscences on the My Heartland Forum, states that there "only about thirty or forty people there, and about ten of them (myself included) had travelled down there from Wakefield". The other account was discovered on a fitness website, with one poster stating that she saw TSOM "with ten others in Retford Porterhouse many moons ago". (an average of the two estimates gives us just twenty-five punters to see the number one indie band of the time !). Not surprisingly, no photos or tapes have emerged from the gig so far, but as with so many such cases, collectors live in hope that one day some artefacts will materialise.

As this wonderful archive photo of a Meteors gig (from a Porterhouse appreciation FB page) will demonstrate, the venue was relatively small, only holding 200 poeple, the walls were black and there was a tiny stage which offered no barrier between the band and fans, and was barely raised because of the low ceiling.This video of the UK Subs at the venue (which those with musical taste might want to view with the sound turned down) gives some impression of the atmosphere and intimacy of the club.
Sadly, like so many venues wehere TSOM played, the Porterhouse became a much trendier club with little or no emphasis on live music, and eventually closed its doors, being sold at auction in 2011 for £114,000, despite an online campaign to save it as a venue.