Ben Gunn’s recruitment to TSOM coincided with the “golden run” of singles in the eighteen months from “Body Electric/Adrenochrome” (April 1982) to “Temple of Love” released in October 1983, the month he left the band, but although he played with the group at what many contend to be their “live” peak, he has been relegated to a footnote in Sisters’ history, whereas the equally brief smoke’n’hats era of his replacement Wayne Hussey (84/85) has commanded thousands of column inches, and still continues to do so.
Benjamin Matthews, like Andrew Eldritch, was a Southerner by birth, but his family moved to Leeds from Clapham (South London) when he was in upper primary school, and a few years later he received the call to join TSOM whilst still at high school during the winter of 81/82. “I joined the band about 18 months ago,” he told Leeds fanzine Whippings and Apologies in 1983. “I got to know the band through some ex-Expelaires [former group of Craig Adams and of Wolfie from the Lorries] and things went on from there.  They rang me up one day and asked if I wanted to join their band and I said “no” at first because I was in the middle of my A Levels. So they spent ages convincing me that they were going to be the biggest thing Britain had seen since The Stones or The Beatles. I didn’t really believe it and asked them for the name of the band. They said, “We’re The Sisters of Mercy” and I said ok, I’d join straight away.”


Matthews (rechristened Ben Gunn after the character in RL Stevenson’s Treasure Island) was in situ by the time the band played York in Feb 1982 (famously reviewed by Adam Sweeting and with Jon Langford guesting on bass as Craig was on holiday!), with the journalist noting : “As Dr Avalanche pumps through the PA like a battery of AK-47s, the bespectacled Ben Gunn cowers behind his guitar at the back of the stage. A slight and tremulous figure, how could he be caught up in this hideous barrage of sound ? He won’t tell me, and he won’t have his picture taken.” 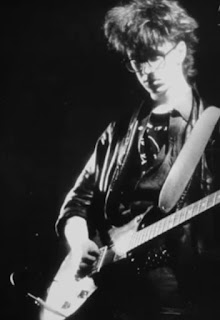 Although Gunn seemed to come increasingly out of his shell thereafter, and became more of a part of the band’s image with his longer “fright”-cut-and-overcoat look (as shown in this photo from the legendary Peterborough gig kindly provided from the collection of Phil “Spiggytapes” Verne), his move to the front right-hand side of the stage as Craig took increasingly to the rear, and his role as Nurse to the Dr during lives shows, Eldritch remained ambivalent about his importance. On the one hand, in another 1983 interview he opined, “Ben’s got a much more open mind on things. The balance of all these four [ie himself, Craig, Ben and Gary] is what makes it work”, but a decade later, interviewed by Kenny Garden for UTR, he played down Ben’s part in the band’s rising fortunes at the time ; “He was there a lot longer than some of the others. On the other hand he didn’t really do anything so it’s fair enough [that you never hear about him]. He’s never made out that it was much to do with him at all…He never really got the plot. That was one of the fun things about having him around, cause … he always looked like the archetypal dork and in a lot of ways it made sense…it was another way of saying this is not cock-rock.” Seeing as Matthews’ lawyers had recently (rightly) demanded his cut from the royalties of the SGWBM compilation in 1992, Eldritch had a vested interest in diminishing Gunn’s role in the band, but the simple fact of the matter was that the addition of a permanent second guitarist in 1982 (after short shifts by the likes of Tom Ashton and Dave Humphries) fleshed out what became the definitive Sisters sound, heard to best effect on the 1983 live cover versions of Emma and Gimme Shelter for example, Gunn’s chords and riffs on his trusty Vanguard adding depth and rhythm to the mix.
Unfortunately, the growing rock’n’roll pantomime surrounding The Sisters began to take its toll, and the guitarist left the band shortly after their first US dates on the East Coast in September 1983, during which he and Eldritch were interviewed by Khaaryn of Truly Needy magazine, which gave some insight into the growing rift between singer and guitarist. (Khaaryn : What do you try to do on stage ? Ben : Performance-wise ? Do you mean the way we project ourselves ? I don’t know…I’m …I just try and project what I…I’m…I don’t know.   Andrew : Ben projects a great deal of confusion!) Ben’s departure left the band to perform as a three piece for the Stockholm and Californian gigs in late October, by which time Hussey had already been recruited as his replacement.. The following year he told Jayne Houghton in ZigZag magazine “They were always taking the piss out of the system, which is why I was in the band, until they started taking themselves more seriously. Now [the Hussey major label era was well underway by this time] they’re no better than anyone else. Worse, in fact.” Gunn was of course five years younger than Eldritch, and with the latter now beginning to see TSOM as a viable career option and seeking a deal with a major record label, with all the restrictions and obligations that such a move would inevitably entail, it was clear that Gunn had a different agenda. A more neutral observer and fellow escapee, Gary Marx, was quoted by Heartland Forum boss Quiff Boy in 2014 on the issue : “I asked Marx about Ben a few years ago now, and he said that he [Gunn] was a quiet John Peel indie kid who loved the intellectual side of guitar playing and hated the “sex drugs and rock and roll” side of The Sisters. I [QB] gather that he wasn’t too comfortable as Eldritch immersed himself in the sub-Led Zep rock and roll lizard king schtick. It figures that he’d leave in about ’83 when the band were getting more and more into that “mode”.”
When asked about the line-up change at the time , Eldritch told the German “Spex” magazine in 1984 “He left us to go to university. He had to get something into his head. It was a necessary evil”. Thus it was that Matthews, after a brief spell as a rock svengali, setting up Flame On records to release the first single by Mel Cockshutt’s Anabas and allegedly trying to set up his own band, the Torch (“We never really existed. That was just another piss-take to get me a few extra lines in the music press. It worked!”), went off to Liverpool University to study Economics. Whilst there, he was apparently in a “comedy” impromptu blues band called Stanley The Counting Horse after a local equine mathematical genius celebrity, clearly further indulging his love for taking the mick out of the music industry. Effectively however,  he had by then left the music business for good, after what must have been the craziest Gap Year(s) in history. 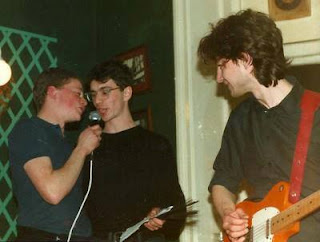 Subsequent sightings have been rare, mainly word-of-mouth anecdotes or information gleaned from a Friends Reunited profile, but he clearly wishes to enjoy his privacy and not seek to profit further from his time in the band, a right which I shall naturally respect. His tenure in the band and subsequent departure may have been less controversial than Hussey’s, but for many Gunn was a key and essential member of the definitive TSOM line-up.

(Following the previous post, to continue to celebrate the 35th anniversary of TSOM as a live entity, we look at what was possibly the worst TSOM gig of all time)

If Peterborough 1983 was (one of) the best Sisters gig ever, nominating the worst is equally easy for me. There are many who would state that one of the mumbling and barking, fogbound performances of the last decade, with no “live” bass and (initially) rookie, unknown guitarists, would easily take that accolade, but there were many off-days “back in the day”, as Von himself has testified.
Indeed, the misfiring drum machine, stage invasion pauses, forgotten lyrics and more than occasional bum guitar notes were as much a feature of the early gigs as the white-hot atmosphere, the impassioned vocals and the throbbing basslines. And listening back to a recording of the gig described to me by champion concert cassette collector Phil Verne as “chaos”, one cannot but put forward the view that the gig at the then Leicester Polytechnic (now De Montfort University) Students’ Union in October 1982 was the ropiest of them all.
Gary Marx stated that the first proper tour the Sisters undertook was in March 1983, and as headliners this was most certainly the case, but the previous autumn they had played a series of dates in support of the Psychedelic Furs around the universities of England, as the links between the two grew stronger (Furs’ manager Les Mills was a noted fan, as was guitarist John Ashton who had just done production duties on the iconic breakthrough “Alice/Floorshow” single released at that time). 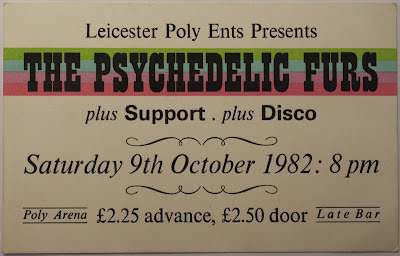 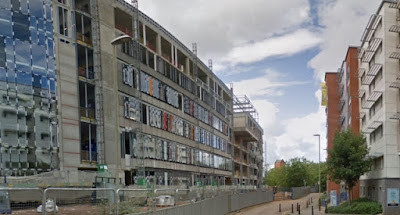 Once again, my (indeed our) thanks are due to Ali H, LG and Phil V for their extensive contributions to this post. If anyone was at a 1981-1983 gig not yet covered on this blog, please do not hesitate to get in touch