The first revelation about the Sisters’ support slot to the legendary Nico at Caesar’s club in Bradford is that it took place in November 1982 and not the previous year as many have assumed. Although not listed on the band’s official website, the wiki gigography featured the gig for the past decade as having taken place in 1981, based on information supplied by well-known collector Robin C, who unearthed this magnificent ticket from the gig. As is often the case, the mistake was repeated on other websites, and before long Saturday 21st November became the established date for the concert. However, the ticket clearly gives the date as Sunday 21st November which would place it in 1982, and further investigations of the headliner, Nico, would tend to confirm this. 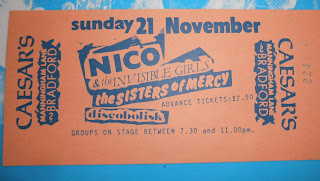 pic courtesy of Robin C
Nico (real name Christa Päggen) was a German chanteuse who rose to fame as guest vocalist (on three tracks) on the seminal debut album by The Velvet Underground (entitles The Velvet Underground and Nico), widely hailed as the first “alternative” album as rock music became an art form in its own right. Brian Eno, speaking about the album in the year of the Caesar’s gig, famously said that although it only sold thirty thousand copies in its first five years, “everyone who bought one of those 30,000 copies started a band.” Her solo career was an itinerant affair, starting in the US under the influence of friends like Brian Jones, Jim Morrison and Iggy Pop, moving to France (scene of the infamous concert in Reims Cathedral where fans allegedly urinated on the pillars) for most of the 1970s and settling in Manchester in the early 1980s, where she worked with a variety of backing bands (“Nico and friends”, “Nico and The Blue Orchids”, “Nico and the Invisible Girls” and “Nico and The Faction” was the rough order).

1982 was one her more active years, touring the UK and Europe early in the year, with an appearance at Futurama 4 (infamously held in the ice rink at Deeside Leisure Centre with no West Yorkshire venue available) followed by a Scandinavian tour in the autumn, but it also saw the only studio release of her solo career under the name “Nico and The Invisible Girls”, the single “Procession”, which again helps to confirm 1982 as the actual date. Incidentally, Wayne Hussey was no longer part of (Joy Division producer Martin Hannett's house band) The Invisible Girls at this stage, after his stint on tour and in the studio with band and Pauline Murray the previous year. The Futurama gig (alongside Southern Death Cult et al) was not Nico’s only encounter with the increasingly pre-eminent post-punk movement, as she joined Bauhaus on-stage for an encore in October 1981, and promoters would often book a proto-goth support act to try to flesh out the crowd for what could be unpredictable and chaotic as well as mesmerising gigs, given the singer’s well-documented heroin addiction at this time. Cherry Red Records have kindly uploaded to YouTube excerpts from Nico’s 1982 show at the Preston Warehouse, which will give a fair indication of what awaited TSOM fans who attended their own gigs supporting her in London in June 1982 and here in Bradford five months later.
The venue for the November 1982 show was also unusual, as Caesar’s had started life in 1960 as the Bradford branch of the Mecca organisation’s new Locarno brand of nightclubs. Quite why the corporation had selected an out of town centre site for its two thousand capacity superclub is unclear, but out on the Manningham Lane close to Bradford City FC, the club proved instantly popular, drawing punters from far and wide to marvel at its famously opulent toilets! The glamorous location became a regular stop-off for the BBC’s Come Dancing ballroom show, under the thirsty-five thousand twinkling light bulbs imitating the night sky. 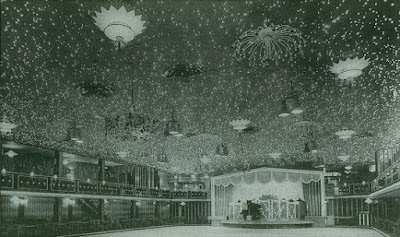 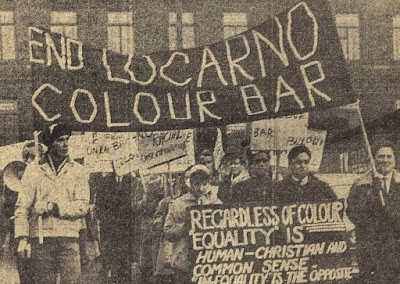 (photo credit : Hayes People's History)
Controversy was not far away, however, when it became clear that the club was operating a “colour bar”, only admitting non-white male patrons if they were accompanied by a female. Trade unionists and students (from Leeds University, I'm proud to say) joined the local protests (lead by councillors and clergy), and arranged a march in November 1961 to protest at the blatant racial discrimination. The police would only allow twenty protestors to congregate, but over 150 turned up, and with the pressure increasing the ban was lifted in January 1962. After many years as the Mecca (an unfortunate choice of name in an increasingly Muslim district), and then Tiffany’s, the club was trading under the name Caesar’s when this gig took place, but by 1984 it was under the ownership of larger-than-life Yorkshire businessman Chris Edwards (best known these days as the founder of bargain shop chain Poundworld) as Dollars and Dimes (like many “superclubs”, the venue had a smaller venue which could be used for more specialist events). Also trading as “Marquees” and “Pennington’s” in subsequent years, it had an ill-fated year as a northern outpost of “The Town and Country Club” before shutting its doors a decade ago. After years of dereliction and occasional visits from Urban Explorers, it still stands empty to this day. 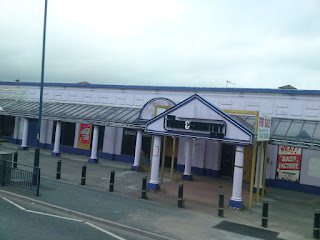 Nico sadly passed away in July 1988 whilst on holiday in Ibiza, having banged her head when falling from her bike having suffered a heart attack. She was 49 years old, and was buried in Berlin. A memorial service for her was held in the unlikely venue of St John’s Church, Upperthong, as Nico apparently loved walking in the hills around Holmfirth. It is alleged that actor Bill Owen, who played “Compo” in the long-running BBC comedy series The Last Of The Summer Wine filmed in the region, attended the service (and is himself buried in the churchyard there).

Of The Sisters of Mercy's gig at Caesar's in November 1982 no further evidence has sadly emerged, with no live audio, photo or review yet having surfaced. In order to gain further confirmation, I tried to track down the second support band, "Discobolisk", who were a jazz influenced band who had a track on a Rough Trade compilation which proved popular in Japan, but left little trace on the internet. However, the band was mentioned in the career summary of a noted saxophonist in an online encyclopedia of Belgian jazz music, and after some further research I was soon exchaging e-mails with Joe Higham, who told me that sadly he didn't feature in any of the band's gigs, only in the studio recording.

Any further information about this unique gig, the band's last in West Yorkshire in 1982 prior to the Christmas gigs in London, would be very gratefully received!

My thanks for this post are extended to Robin C, to Joe H and to Phil Verne of the 1980-1985 TSOM unofficial fan page on Facebook where discussion of this gig will no doubt continue!
Posted by nikolas vitus lagartija at 10:11 4 comments: