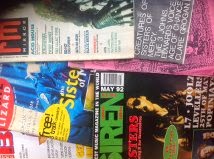 As the attached photo will prove, there was a time when lazy magazine editors simply had to stick a picture of Von on the front cover to guarantee a few extra sales from gullible young goths. Whilst originally (such as with the Sounds cover in December 1982) an indication that there was a major new interview inside, wily fanzine/magazine producers soon cottoned on to the fact the the loyal and rabid Sisterhood would snap up anything and everything with the cult band's name on the front, leading to more than a few pointless purchases on my part.

I can well remember the mixture of anger and disappointment on discovering that the promised and eagerly anticipated Sisters content amounted solely to a rehashed biography of the band (which I could have written better myself) and a few stock photos, some of which had even been inadvertently inverted. By the early 90s a mixture of the knowledge that the old curmudgeon would provide some decent copy and the guaranteed sales that this would ensure meant that journalists were falling over themselves to be the latest hapless victim of one of Von's withering verbal assaults when sent by the editor to get some interesting stories about, for example, the reissue of the SGWBM tracks.

TSOM may be enjoying a lower profile these days (it doesn't look as if there will be any action of any kind in 2015, sadly), but even in the recent past the likes of Vive Le Rock and Terrorizer's Dominion supplement have seen the value of sticking Eldritch on the cover, just like "back in t'day". Will we ever learn ??

Posted by Nikolas Vitus Lagartija at 05:42 No comments: