When you think of classic early 1980’s The Sisters of Mercy, certain iconic objects come to mind: Eldritch’s shades, Ben’s NHS specs, Gary’s Hawaiian shirts, Edritch’s leather jacket and later frock coat, Craig’s mercifully short-lived 1984 stetson, Wayne’s collection of hats, Von’s sideburns … the list is endless. Yet one item is more symbolic than any other of the esprit de corps in the band in those breakthrough years .... Gary’s gaffer-taped boots. 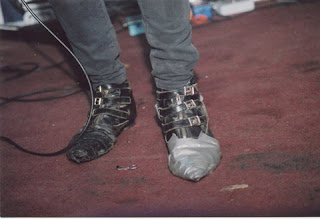 Over on the wonderful 1980-1985 FB fanpage, kind-hearted Belgian collector Bruno Bossier shared some magnificently sharp photos which he had acquired of the Hull Tiffany’s gig on Monday 18th March 1985 on the Tune In, Turn On, Burn Out tour to coincide with the release of FALAA the previous week. One of the photos (reproduced here) shows the prized footwear in all its self-repaired three-buckled glory.

The boots had become a bit of a cause célèbre, and went on to feature in Gary’s last interview as a Sister which duly appeared in Artificial Life fanzine. The interview took place on the early afternoon of Sunday March 24th, as on the cassette recording of the chat, a TV in the background can be heard playing the familiar theme tunes of (the end of that day’s omnibus edition of) Eastenders and Match of The Day (the start of live coverage of the Norwich v Sunderland League Cup Final).

At one point in the interview, the journalist (Jake Jacobs) notices Marx’s unusual footwear and asks him about it. Marx’s response shows the level of commitment which and other band members had to the project, having already said “There’s a lot of sacrifices for the band.” Many 1980’s artists would have been provided (out of their advance) with the latest fashions and a dresser to help with sartorial purchases, but TSOM continued to plough their meagre finances back into the band: 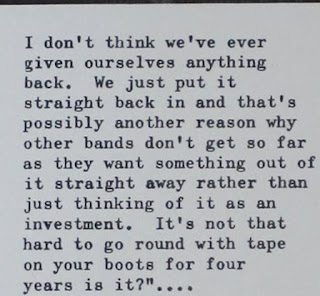 Four years! This might seem to be a gross exaggeration, but in the aftershow footage of the legendary Peterborough gig two years earlier (again kindly uploaded to YT by Phil Verne, watch out for Gary at about 10:27), the offending shoes were already patched up with (a smaller amount of) gaffer tape, and are the identifying feature as Marx walks through the shot. The situation is summed up at the end of the Artificial Life interview, where Jacobs pays a fine tribute to the guitarist, just after the latter has humorously stated his ambitions, including a desire to be (sort of) better shod: 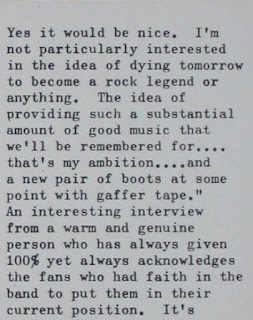 My thanks for this post go to two of my regular partners-in-crime, Phil Verne of the 8085 FB group for the extracts from the fanzine (the full print interview can be seen on that FB group) and to Bruno Bossier for sharing the wonderful photo.

Posted by Nikolas Vitus Lagartija at 11:56 No comments:

Thirty-five years on, the very earliest gigs by The Sisters of Mercy in the early Spring of 1981 remain shrouded in mystery, with those concerts that are listed in gigographies largely based on dates on cassettes which may or may not contain tracks recorded on those particular days.

The very first gig, supporting The Thompson Twins in a college JCR at the University of York, was often referred to by the band in interviews in the 80s, and even on stage by Eldritch, and the date of the show (16th Feb) subsequently featured in 10th, 20th and 30th anniversary shows and celebrations.

The probable date and location of the second gig was for a long time unknown, but research by Phil Verne of the 1980-1985 TSOM FB group a few years ago confirmed that the band played a very early gig in support of Altered Images at the F Club in Leeds on March 19th 1981, unearthing a review from the Bradford fanzine Wool City Rocker to prove that the gig had actually taken place. This concert was also discussed in the earliest known interview with the band from spring of 1981 which featured in local Leeds fanzine “Whippings and Apologies”. “Without a decent PA, we sound really crap. Like when we supported Altered Images at the F-Club, that was a real balls-up because of the bad sound,” was what a not-particularly-eloquent Eldritch remembered of the show.

Earlier in that W+A interview, Eldritch had stated, “We’ve only ever played three gigs before,” so it seemed reasonable to assume that the Altered Images gig was the band’s second ever concert, and their first in their home city of Leeds, a supposition repeated by Mark Andrews in his fantastic recent article on the early days in The Quietus.

However, this month (December 2016), the 8085 Facebook group has been holding an impromptu Gary Marx retrospective, with members sharing artefacts and memories of one of the two founding members of the band who rarely gets the credit he deserves these days. Looking through his extensive collection for more material to share with the group, Phil Verne came across a cassette which he had had in his possession for some time, containing a fanzine interview (Artificial Life) with Gary from 1985, which he had purchased off leading Sisters historian Mark W... some time before. Background noise from a blaring television during the interview makes it difficult to pick out some of the comments, so Phil asked me to have a listen through a couple of sections to see if there was anything of interest amongst the usual well-known facts and opinions.

The interviewer mentions that he had seen TSOM supporting Brilliant and The Smiths supporting TSOM, and how the band’s fortunes had been reversed since in both cases. Marx tells him (in this extract kindly uploaded onto YouTube by Phil) “When we first started out, in our first gig we supported the Thompson Twins….The second or the third... It was something like The Thompson Twins, then Altered Images, and then the band that are now King – they were called The Reluctant Stereotypes I think at the time. So that was.. our first three gigs,” before going on to discuss Brilliant and The Smiths.

To me, this was incredible new information- no Sisters gig with Reluctant Stereotypes is currently listed. Reluctant Stereotypes singer Paul King, after his five minutes of fame with “Love and Pride”, eventually washed up as a VJ on the rapidly expanding MTV satellite channel, and surprisingly to many people became their in-house "alternative music" expert, hosting the “120 Minutes” show, for which in 1991 he ended up interviewing .... none other than a Vision Thing era Andrew Eldritch, during which as usual the TSOM frontman ironically had to spend much time defending their position as reluctant (gothic) sterotypes.

The former police cadet King did have a more alternative past himself however, with the Reluctant Stereotypes. As they were from Coventry, the avant-garde jazz ska art-rock ensemble had become caught up in the Two-Tone wave, taking part in a second wave seaside tour in the summer of 1980 with the likes of the Bodysnatchers. By 1981 however, it was clear that they were unlikely to break thorough, and they disbanded after a final show at the Reading Festival (still in its Dumpy’s Rusty Nuts phase) that year. 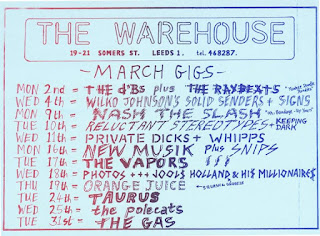 Earlier in 1981, however, they had undertaken a few dates in the early Spring, and Phil Verne has unearthed this poster from the Leeds Warehouse (again from Wool City Rocker) advertising gigs in March of that month, with the Reluctant Stereotypes clearly listed as playing on 10th March, a week before the TSOM gig with Altered Images (which took place on the same night as the Orange Juice gig at the Warehouse). That the gigs were close together makes it totally understandable that Marx would have been uncertain some four years later about the exact sequence of events.

Although no other evidence yet exists for this gig, and TSOM are not even listed as support, Marx’s reminiscences make it clear that this Warehouse gig was in all likelihood the band’s second gig and their home town debut, as it is unlikely that a band like Reluctant Stereotypes would have played twice in the area within a matter of weeks. (Edit : However, evidence uncovered after the publication of this post has established that the Warehouse gig did not feature the Sisters - the Reluctant Stereotypes gig referred to by Gary Marx, with TSOM as support) in fact took place on 7th May 1981 at York University. - edited by NVL, October 2017)

It is incredible that three and a half decades on, significant new facts continue to emerge about the band’s early days, with the recent interview with Jon Langford, Mark Andrews’ Quietus piece and John Robb’spiece for LTW all adding to the picture. I would like to once again pay tribute to the generosity of Phil Verne for sharing items from his archive and allowing us to piece together another section of the 1981 jigsaw. If anyone can confirm this informed speculation, we would be delighted to hear from you!

Posted by Nikolas Vitus Lagartija at 11:52 No comments: