(This is the second of a three part series looking at Andrew Eldritch’s Leeds from the air, thanks to the wonders of Google Maps)

When Andy Taylor arrived in Leeds in October 1978 to enrol at the city’s university, it represented a fresh start for him after what must have been the disappointment of dropping out of Oxford University. Leeds had been chosen almost by chance, as it was one of fewer than half a dozen universities in the UK at the time offering an undergraduate degree in Chinese, and possessing the impressive A Level grades required for entry to his previous academic institution, being accepted by the University of Leeds was something of a formality for the confirmed Southerner.

However, once again fate would take a hand, and a combination of factors (not least the requirement to spend a heavily-chaperoned second year of the course studying in Beijing) would lead to Eldritch dropping out for a second time after a mere year's study, but not before he had immersed himself in the city’s emerging punk culture and the more centralised fun offered by a large city campus. 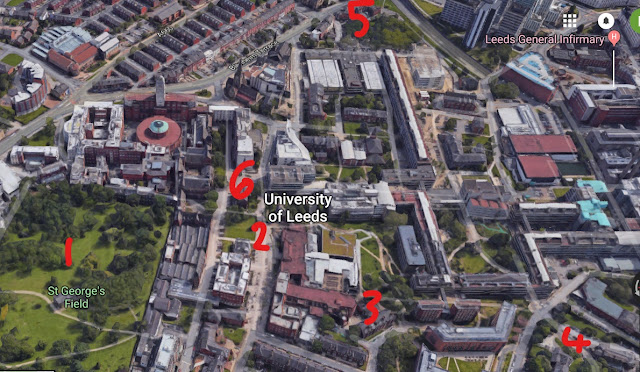 The left-hand side of this aerial photo of the campus is virtually unchanged in the forty years since Eldritch completed his matriculation in the formal surroundings of the Parkinson Building, which features an Italianate/phallic (depending on your level of maturity) white tower in the upper centre left of the picture, just above the circular Brotherton Library. The lower part of the campus however has changed significantly since the 1980’s, as can be seen by comparing an aerial photo from the early 80’s (recently shared by the University online) with a similar view from Google maps. 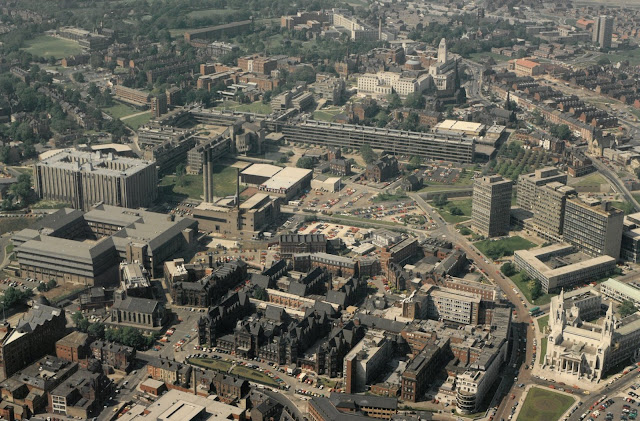 The first stop-off for a TSOM heritage tourist however would most likely be St George’s Field (labelled with a number “1” on the image), one of the few remaining areas of greenery on an increasingly dense campus, for it is here that one of the most iconic images of the band was taken (by Tom Sheehan in early 1985), oft-reproduced because of the graveyard feel which reinforced the media’s goth stereotyping of the band. The stone memorial has become a place of pilgrimage for Sisters fans (the bottom photo below, for example was taken by noted Belgian collector Bruno Bossier and is reproduced with thanks), and TSOM tribute band The Marching Men (with The Blogging Goth curator Tim in the Eldritch role) recreated the classic shot during their own all-too-brief heyday (middle photo), a photo often confused with the real McCoy (write your own goth pun). 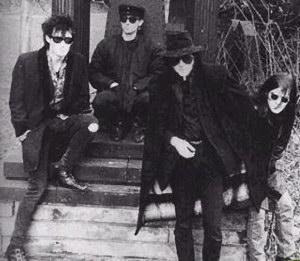 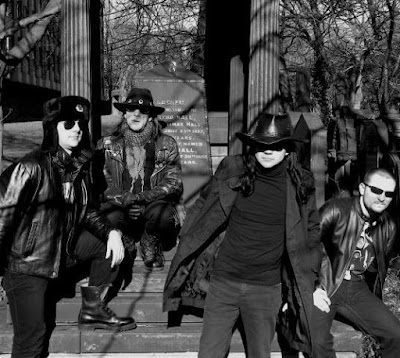 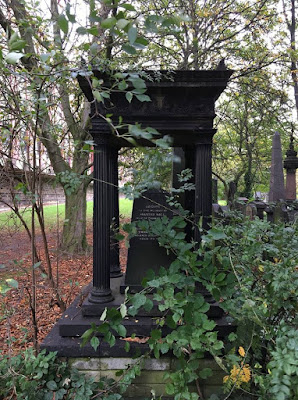 Central to campus life for all Leeds students was the University Union, a social and cultural centre for students which was – and still is - one of the largest and most dynamic in the country. On this image, it’s the group of buildings (of different eras and styles) to the right of the red number “2”. The Union houses the Riley Smith Hall, where TSOM gigs played in 1981, 1982 and 1984, and this can be seen (with a dirty red roof) just under the “Lee” of “University of Leeds” on the aerial photo at the top of this blog. The Refectory, the canteen-cum-concert hall where they played on the Black October tour and then again in March 1985, is also part of this collection of buildings, the long thin red-roofed building just to the left of the red number 3. In a very early piece on this blog I described it thus: “The Refectory was basically the respectable student and staff self-service restaurant serving glorified school meals and salads during the day, but transformed into a rather unconvincing concert venue in the evening. The balcony added some atmosphere, and also gave more extrovert performers like Bono and Lux Interior somewhere to climb up to during the inevitable “Look at me!!” phases of their gigs”. This was also the hall where The Who recorded what is considered to be one of the best-ever live albums, “Live In Leeds”, and there is now a blue plaque outside the building commemorating this fact. The Riley Smith Hall was (according to the same blog post) “the union’s main debating hall and home of the weekly political bearpit, the OGM (“Ordinary General Meeting”), where party hacks of the future lined up to take on the all-powerful Socialist Workers’ Party”. All gigs at the university were put on by the Union’s “Ents” and “Events” committees, dedicated groups of music-loving students who volunteered to cook, steward or do a variety of other jobs to keep ticket prices down for students and non-students alike. 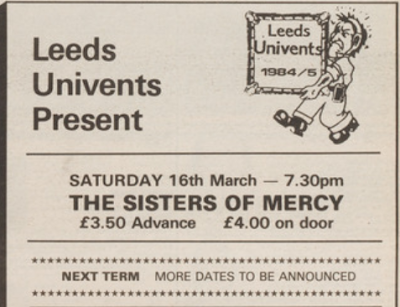 Also visible on this aerial image at the top of the page are the two pubs indelibly linked with The Sisters of Mercy. The building just underneath the red number 4 is the Faversham (known to one and all as the “Fav”), literally a stone’s throw from the campus edge and immediately next to the most upmarket and therefore expensive of the student residences, Charles Morris Hall (known as “Charlie Mo” to its upper middle-class inhabitants), which provided most of its clientele. Allegedly because of its late night bar and its pool table (and according to Mark Andrews’ article on TSOM for The Quietus, Eldritch’s girlfriend Claire was a real pool shark), the “Fav” became the unofficial base of the band and its entourage, and on my one visit to sup the over-priced (compared to the Union) beer there Ben Gunn was at seated at an adjoining table and Eldritch was over by the bar with a group of fawning acolytes. It was also probably the closest pub to Eldritch’s early 80’s flat on Bellevue Road, undoubtedly another reason for its popularity with the singer. 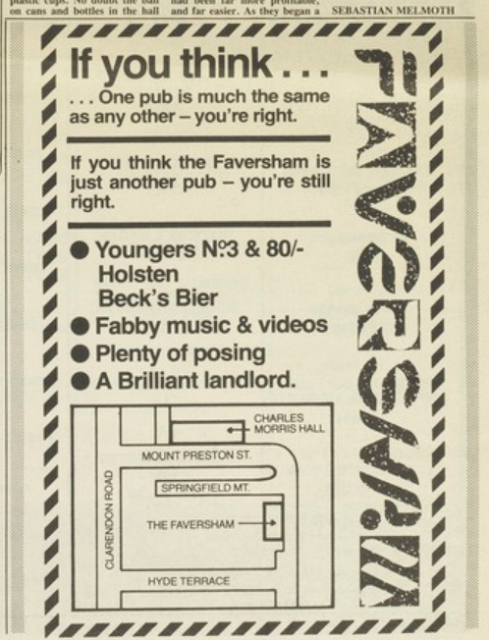 The other pub with a heavy TSOM connection is The Fenton, indicated by the red number 5 on the aerial shot and directly opposite the sandstone church on Woodhouse Road. Eldritch spoke enthusiastically of the Tetley’s pub when reminiscing with Mark Andrews for his Quietus piece: “It was the pub you went to before gigs at the uni. Everybody thought fondly of the Fenton. Going back to the days when there was street fighting, the Fenton was very unwelcoming of Nazis and welcoming of the likes of us. The whole atmosphere was very politically-charged and we were very clear which side we were on.” It was no accident that The Fenton for the warm-up gig (billed as “Near Meth Experience”) when TSOM returned to gigging after a three year hiatus to tour as main support to The Sex Pistols on their own legendary comeback tour in Germany in 1996.

The other number marked on our photo of the university campus (“6”) marks the location of the university’s Chinese department in the late 1970’s. The singer would spend only last one year of the four year course in the then modern building before dropping out for the second time.

The third and final post in this trilogy on Andrew Eldritch's Leeds will focus on the city centre. My thanks for this post are due to Bruno Bossier, Phil Verne of the 1980-1985 TSOM FB fan page, and to others who have helped.

Posted by nikolas vitus lagartija at 08:55