They say that absence makes the heart grow fonder, and that was certainly the case in May 1984 when The Sisters of Mercy arrived back in Leeds for the fourth date of the tour to support their forthcoming major label release, the "Body and Soul" EP which would finally arrive in the record stores the following month. After the fan club gig in Birmingham in early April 1984 to introduce new guitarist Wayne Hussey to the fanbase and literally get the show back on the road after a six month hiatus, the band had undertaken a second East Coast US tour, playing half a dozen shows in as many nights as they prepared for what would be their first major headlining UK tour, with Flesh For Lulu as opening act.

Despite their relative inactivity over the preceding six months, since the last TSOM gig in Leeds a year earlier the band had released the Alice 12”, The Reptile House EP and the Temple of Love 12”, played extensively in London and in Europe, played their first dates in the US, lost guitarist Ben Gunn and replaced him with Hussey, as well as eventually signing a distribution deal with Warners after lengthy negotiations, and with the band's records now staples in even the most mainstream of Leeds clubs, the hometown gig was particularly eagerly awaited. 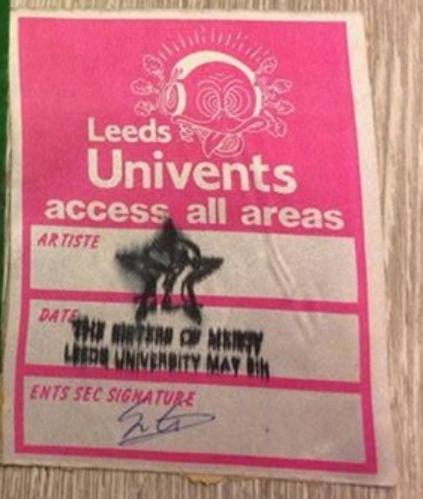 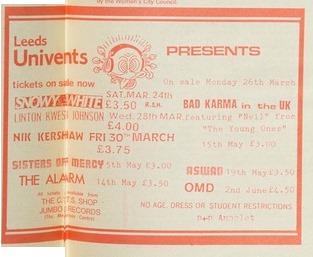 The tour book (issued to band members and crew, detailing hotels, timings, stage dimensions, load in times and the like) for this Spring trek across the UK bears the title “British Pilgrimage”, presumably a reference to the religious connotations of the band’s name, but this featured in none of the publicity surrounding the tour and I have never seen it quoted anywhere else. The Leeds date came after excellent shows at Nottingham’s Rock City (where Gary wrecked his guitar), Middlesbrough Town Hall, and a legendary alcohol-and-banter-filled show in the upstairs hall at Manchester University Students’ Union, and was their fourth show in the Leeds University Union Riley Smith Hall, the main theatre/debating chamber used for smaller touring bands (the band's three previous appearances being the two Music For The Masses gigs in June and November 1981 and the Furs support in October 1982). 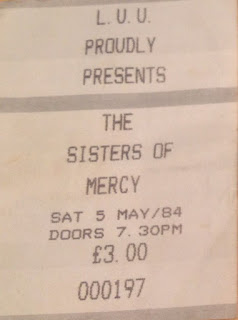 A live recording of the May 5th 1984 show has survived and confirms that there was a sizeable audience present for the homecoming, with Eldritch referencing their lengthy time away from the Leeds live circuit in a semi-audible comment before the gig starts with the usual Doktor Avalanche introduction to “Burn”. Whether Gary is struggling with his new guitar, or whether the chemistry between himself and Hussey had yet to develop to telepathic levels, there are some technical issues in the opening song, after which the first predictable chants of “God Squad” can be clearly heard. After Eldritch has informed a heckler that the band no longer plays “Jolene”, the customary second song “Heartland” begins, with Eldritch in final vocal form despite tuning and tone problems again from Marx’s guitar.


The first of the new songs, “Walk Away” follows, still in very embryonic form and with lyrics which bear little relation to the version ultimately released as a single some five months later. After muted applause, the band launch into “Anaconda” which receives the loudest cheers to date, but before any real rhythm can be established, forthcoming single “Body and Soul” gets an airing, with further guitar pedal and volume issues. There’s also a rougher, choppier than usual guitar sound on “Floorshow”, although the Doktor, Adams and Eldritch see the song to a successful conclusion as usual. So far in the gig the band’s sound quality, to judge by the surviving recording, is less polished than at any time since 1982, but the loud cheers at the end of the perennial alternative dancefloor favourite show either that the audience couldn’t care less or (as is often the case to this day) that it sounded better in the hall on the night than on a tinny recording many years later.

After the kind of lengthy minor guitar retuning break which regular TSOM bootleg tape listeners will be more than familiar with, the booming bass intro to “Emma” rings out, both guitars now intertwining more successfully than earlier in the set. Eldritch is of course in wonderful form, recounting Errol Brown’s wonderful lyric, allegedly about his (Errol's) mother’s untimely death.
The pace picks up immediately again with a superb “Adrenochrome”, which proves that the sound issues have been largely solved, and as with the other gigs on the tour, the “oldies” see the set through to a successful conclusion, with “Alice” and “Body Electric” played back-to-back. To the delight of the long-term fans in the audience, the traditional covers of “Gimme Shelter” and “Sister Ray” are offered as encores, with a confident Hussey improvising a little more than Gunn had done in the former, whilst the latter (kindly uploaded to Soundcloud by Phil Verne of the 1980-1985 The SIsters of Mercy Facebook unofficial fan group) is as experimental and focussed as I have ever heard it, with Eldritch primarily singing rather than screaming and screeching, certainly far removed from the seriously unhinged versions of the early gigs or in 1985 for example. 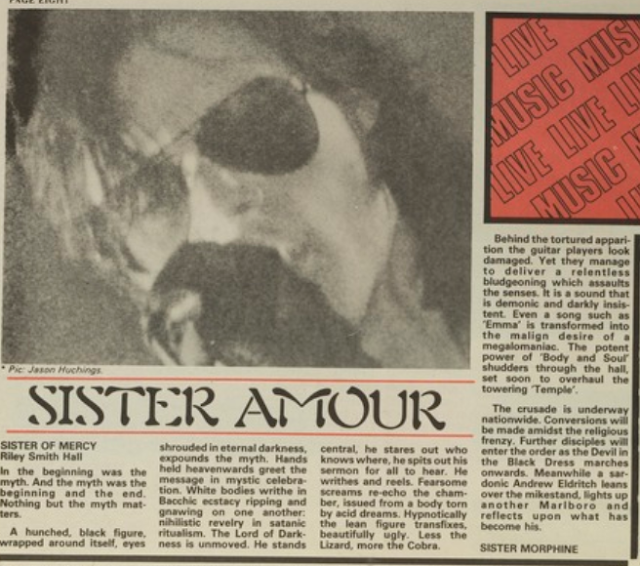 The Leeds Student newspaper digital archive contains a review of the gig that was published at the time, by “Sister Morphine”, but which has not been widely circulated amongst fans. Interestingly, rather than focussing on gig itself, bar mentions for a couple of song titles, the “review” is instead fixated on the increasingly important figure of Andrew Eldritch, his stage persona and his relationship with the band’s devoted followers. The journalist seems convinced that Eldritch too is contemplating the theme of the returning messiah, which seems entirely appropriate given the reaction given to the band for what was clearly far from one of their best live performances.

On their return to the University Union during the Black October tour later in the year, The Sisters of Mercy would finally get to headline the university’s main stage, The Refectory, as their fame and legend spread and with Hussey becoming firmly ensconced within the band. By then however, the various pressures that would lead to the cracks that would split the band apart in 1985 had already began to appear. Back in May 1984, with the ink barely dry on the major label deal, a new single in the can and a new guitarist fitting in well, there seemed to be only unlimited potential.

My thanks to all who have helped with this post, including Circle, Phil Verne of The Sisters of Mercy 1980-1985 FB group, collectors LG and Paul Y, and to my own brother whose ticket is displayed here.


Posted by nikolas vitus lagartija at 01:03