Those who attended the 1984 York Rock Festival and witnessed The Sisters of Mercy’s lacklustre daylight performance, complete with technical issues and windswept sound may believe that they saw by far the worst gig by the band during the increasingly professional Hussey era, but those who attended the 7th Golden Summernight Festival at Ahlen in (then West) Germany two weeks earlier on 8th September clearly endured a significantly worse experience.
The Sisters were, truth be told, not in the best of shape in the run up to the gig, a time when they were supposed to be putting the finishing touches to the debut album First and Last and Always. Eldritch had collapsed in the studio as, according to Gary Marx, “He was completely exhausted; hallucinating. Despite this, part of him still wanted to carry on, although the other part knew that he had to stop because he was so ill.” 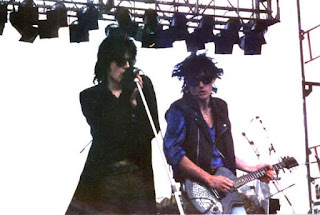 However, the decision was made to honour the commitment the band had made to three September outdoor festivals, with York following a fortnight after the back-to-back “Golden Summernight” one day festivals at Ahlen and Lorelei. The former was booked to take place in a Motocross Stadium on Am Morgenbruch in the southern suburb of the small town of Ahlen in Westphalia, just north of Hamm. 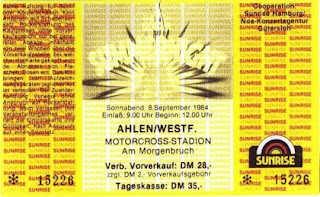 As journalist Alf Burchardt said in his review of the gig for German rock magazine Spex, “Whoever had been involved in drawing up the line-up must have had no musical common sense. Blancmange fans were also treated to Rory Gallagher, and followers of The Alarm were given the chance to see Frank Zappa. With such a bill, those who had come just to see the Sisters of Mercy had little chance to make new acquaintances, but nevertheless, this group made up a sizeable part of the audience because The Sisters, who often have two or three songs simultaneously in the upper reaches of the UK independent charts, have built up a respectable circle of fans in Germany with their records and (so far two) tours. Despite adverse circumstances, the band's followers were also satisfied on this particular day.” 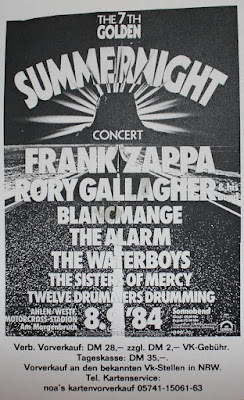 Events were to conspire to make this unlikely line-up even less of a success than the infamous Public Enemy/TSOM joint headlining tour in the US in the 1990’s. First, the weather literally put a dampener on proceedings, with a contributor on a Zappa forum recalling that “it was raining heavily all day – we were drenched,” whilst in a recent discussion on the TSOM 1980 1985 fan page, Thomas Wübker stated that he had also attended, “but all I remember was the slippery surface. I fell in the mud and was dirty all over,” before drily adding “That was my last Open Air Festival.”
Spex reviewer Burchardt also emphasised that aspect in amusing fashion : “Name a relic from the sixties with fifteen letters? – That’s right: outdoor festival. The masses dozing to musical entertainment in the sunshine. But you can tell a lot about the meteorological quality of a 'golden summer night', when grog and glühwein turn into big sellers.” 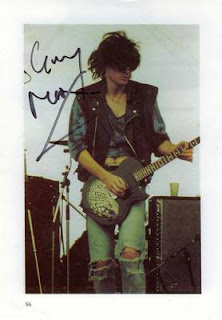 So a near empty venue (Spex estimated that only around a thousand fans witnessed the TSOM performance), bad weather, and of course another enemy of The Sisters, daylight. Wübker recalls “The Sisters played in the afternoon in daylight. That was totally different to what happened in Hyde Park. No fog, you saw the guys clearly.” This aspect was not lost on either the Spex reviewer or indeed Andrew Eldritch himself : “Asking for the band’s opinion of the gig was therefore an obvious question to ask during the interview which took place afterwards in the caravan behind the stage. But songwriter Andrew Eldritch nobly held back from any criticism. After all, these performances are also an economic necessity. Yes, it was cold. Yes, a few more people had been expected to attend. But no, the bill was not that bad. He wasn’t bothered about Lake or The Alarm, but he would love to see Blancmange or the Waterboys. First and foremost, Andrew was bothered by the fact that a cloud-filled sky had resulted in only an inadequate blackout. Although the Sisters are not the “creatures of the night” that many believe them to be, they tend to operate best in the dark. "The element of darkness is not that important to our image or our music, but if you play in the daylight, it's hard to feel the music, there’s no room for imagination," Eldritch opined. It’s true, ruthless daylight really does not suit the band: only when darkness falls does the music reveal its full morbid beauty.” 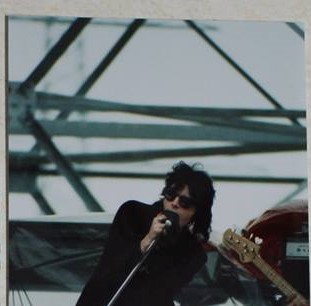 Despite these multiple setbacks, the gig could and should still have been a success, but as so often in 1983/1984, technical problems were to disrupt the set. As Burchardt wrote, “Guitarist Gary Marx broke a string per song, and since he had already successfully combated the cold with alcohol, fitting a new one always caused him considerable difficulty.” (!) This is clearly audible on a sharp audio recording of the gig, shared in various formats in recent years by Ollie C, who says that “around the taper there are some German guys in the audience who do not like the Sisters and are booing and shouting...but this doesn't really affect the listening pleasure.”
Eldritch’s opening vocal line is also virtually inaudible in the set-opening Burn (the setlist having more in common with the Spring gigs than York or the subsequent Black October tour), before the singer introduces the second song : “This one’s called Heartland. [Cheers from the crowd] I don’t know why…. I don’t care”. However, the first guitar problem arises suddenly some fifty seconds in, leaving bass and slightly out-of-tune rhythm to fill in for a few seconds. There are more problems with the top guitar line towards the end, but Eldritch himself is in fine vocal form with strong upper notes in the song’s climax.
Before Body and Soul which follows, Eldritch addresses TSOM’s long-term live sound engineer Pete Turner with the question ”Can you hear me, Peter?...You wouldn’t remember Stanley Holloway would you, he had this catchphrase which was ‘Can you hear me, Peter ?’” Eldritch is clearly thinking of another music hall star, Sandy Powell, whose catchphrase “Can you hear me, mother?” was already out of synch with modern humour by the 1980’s. A fast-paced Anaconda wins the crowd back over, despite further problems with the sound balance of two guitar lines, then more problems with Gary’s guitar solo between the first and second verses as he attempts to make light of having one string fewer than usual. This gives the opportunity for Eldritch to indulge in further banter with the crowd before Walk Away, “Do what?   Don’t talk to me about Manchester, I can puke that far...Football rears its ugly head.” There are further major tuning problems with the guitar in the middle section of the forthcoming single, but again Eldritch rescues the song, singing the middle eight an octave higher than usual.
Marx’s problems reach their zenith in Emma, which features a lengthy flanged introduction without the usual solo initially, and then there are further guitar issues when it is finally attempted some two minutes in. However, the singer delivers his usual impassioned performance, and the crowd respond raucously and positively at the song’s end.
Whilst the guitars sound much better (despite some feedback) on the following Floorshow, Craig’s seminal bass intro is nearly inaudible, and the sparse bass sound is also very low in the mix in Alice, which sounds unusually minimalist with only one fully functioning guitar.
Barely pausing now, the band head straight into Body Electric, both guitars now functioning fully again, and although not perfect, it’s the best performance of the show so far. As the intro to Gimme Shelter starts up, Eldritch announces “One more”, and again the band give a near perfect rendition of the Stones’ classic. Anyone arriving at this stage would have had no idea of the technical problems that had dogged the set. The encore is Sister Ray, the guitars still relatively cacophonous but Von continues regardless, ad-libbing more than usual, and ending the show with a cheerful “Goodnight” and a heartfelt “Danke” to loud cheers and whistles of approval. 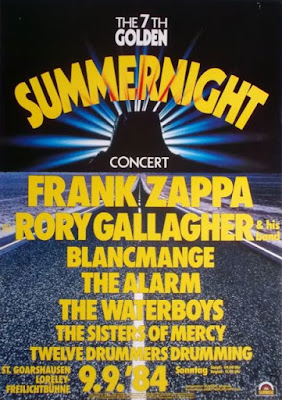 The whole bill played again the next day further south at the somewhat more picturesque location of Lorelei on the Rhine, in the Nazi-built amphitheatre which still hosts concerts to this day. There appears to be no trace today however of the Ahlen Stadion, however, as Google maps shows a housing estate on north side of the Am Morgenbruch road and an industrial estate on the south side. However, an old autocross video on YouTube of the Morgenbruch Ring from 1984 reveals that the word "stadion" is a little euphemistic for what was little more than a dirt track around a field, and the electricity pylons visible at the far end of the track, which can also be seen on some photos of TSOM from the gig (behind the stage, as on the Eldritch photo above), still stand today, a hundred meters south of the Am Morgenbruch road, allowing us to pinpoint more accurately the location of the gig. The Sisters did return to nearby Munster later in the year, with the equidistant Bielefeld also receiving a visit in 1985.
My thanks for their help with this particular post are due to Phil Verne, LG, Ollie C, Thomas W and others who have provided information or memorabilia.
Posted by nikolas vitus lagartija at 07:17