One of the more enduring unanswered questions about the early days of TSOM revolves around the first single, Damage Done/Watch/Home of the Hitmen, released in the Autumn of 1980. Did legendary influential BBC DJ John Peel ever play the lead track or not? No evidence has ever surfaced either way…until now, that is.
Those growing up in this multi-media instant access age must find it hard to comprehend the control which the state broadcaster the BBC used to have on the nation’s musical taste,  but for any aspiring new band, having the ear of veteran Radio One DJ John Peel was an essential pre-requisite of success.
In their official biography, Andrew Eldritch claimed that the fledgling band’s main raison-d’être for making the debut single was to hear themselves on the radio, something which they allegedly achieved according to the band’s own website: “Gary Marx and Andrew Eldritch made some t-shirts in anticipation, and huddled by the radio until…John Peel played the record. They swear he played it twice.” 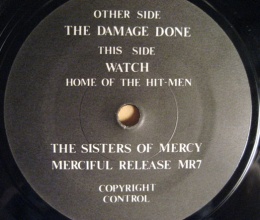 Although both Alice and Temple of Love made the annual listeners’ poll The Festive 50 in 1983, as Walk Away and (the session version of) Emma did in 1984 and the FALAA side-closing stand-out pair of Marian and Some Kind of Stranger in 1985, Peel’s love affair with the band was soon on the wane.

He complained on air that Body and Soul “rather lacks the vitality of their previous work”, and he seemed less than impressed by the “work in progress” tracks of the second session the band recorded for him on 19th June at Maida Vale studios with Mark Radcliffe (a future DJ in his own right) at the controls. The band had been hard at work writing new material whilst on tour for the debut LP and although Walk Away is virtually complete by this time, it is very much a beta version of No Time To Cry that also made it onto the nation’s airwaves. A first studio version of Emma (Peel would describe this as having “possibly the longest fade in the history of recorded music” when playing it on the Festive 50, where it reached the highest ever position for an unreleased session track) and another future B side Poison Door completed the set.

What was mere disappointment with TSOM’s musical direction was to turn into contempt, as he revealed in 1987 in conversation with John Walters. “Every time I do one of my terrible gigs…people come up and say to me, “Can you play something by The Sisters of Mercy?” I just say, “Under no circumstances whatsoever am I going to play anything by The Sisters of Mercy.” With the band by now seeking commercial success with This Corrosion, Peel’s approval was no longer needed, however, and daytime radio helped it to make the UK Top 10.

One final curious note on the Peel show, some of the versions of the songs seem slightly different to the ones on the commercial releases. Hopefully someone with more encyclopaedic knowledge than me will be able to reveal how these came about, and whether these versions are still in existence.

My thanks for this post are due to Phil Verne, Heartland Forum member Mothra, to all the Peel fans who have done such a wonderful job on the Peel Wikia, and of course...to the late, great John Peel.
Posted by Nikolas Vitus Lagartija at 08:15