One of the longest-running TSOM mysteries dates all the way back to July 1982, as legend (and indeed the gigography on the officialband website, listing the date as Sunday 4th July 1982) has it that TSOM played as support to mighty punk stalwarts The Clash on their Club Casbah tour at the City Hall in Newcastle. The City Hall was a famed concert hall dating back to 1927 and where the year previously Motorhead had recorded the majority of the tracks for their seminal “No Sleep ‘til Hammersmith” live set. No hard evidence of this gig having taken place has ever surfaced however, and whether or not the band actually played with The Clash is still a point of some discussion amongst long-term fans.

The Clash were very much in a period of flux and transition at the time, with the first single “Know Your Rights” of the projected new album having failed to chart in the Top 40. There were also reports of poor advance ticket sales for the spring tour, which then had to be postponed when Joe Strummer mysteriously disappeared. The tour was due to feature gigs at the City Hall in Newcastle on May 4th and 5th, but ticket-holders were told their stubs would remain valid for rescheduled dates. Whether Strummer’s disappearance was a McLaren style stunt orchestrated by the band’s manager or whether Joe was genuinely suffering from mental health issues has never been proven definitively either way (and is frankly none of our business), but the band’s spiritual leader returned from France shortly afterwards and the postponed concerts were rescheduled for July, including the ambitious two dates (now on the 14th and 15th July) in Newcastle at the City Hall. 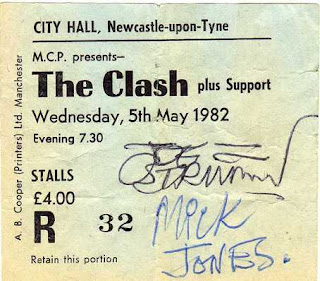 The concept of Club Casbah was a noble one (and very much ahead of its time), providing fans with a whole evening of entertainment to take them out of their comfort zone, rather than just the usual “two bands and that’s yer lot” gig format, and The Clash had a long history of dabbling in other musical genres with various degrees of success. In addition to decorating the venues to create a different vibe and having challenging live DJ sets, local artists were recruited (often at short notice) to flesh out the Club Casbah bill (for example BBC Evening Session favourites APB opened for the Londoners at their Inverness gig). Unfortunately for the now ambitious Eldritch, the Leeds date of the tour, at the University Union, was the last concert promoted by future Radio 1 DJ Andy Kershaw in his role as Ents Secretary at Leeds Uni, so there would be no possibility of sneaking onto that bill given Kershaw’s antipathy towards the band. 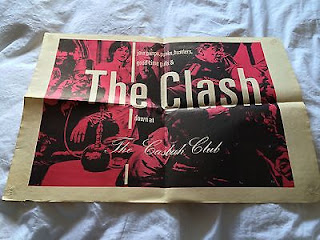 Newcastle was a different scenario however, although some gig guides list a well-known local character, Nod the Geordie Poet as having been the support act. I managed to track down Nod, now known as respectable part-time University of Hertfordshire Lecturer AP Clark. Alan was only too happy to confirm to me details of his own support slot on the 15th: “I got to do the support for only one of the two gigs as my friend was Mickey Gallagher [keyboard player with The Clash]’s brother and we just pitched the idea of doing it after meeting him on the night before. As far as I remember, there was no other support on that night, which might have been the reason that they gave me the gig!”

The last minute addition of a performance poet not only fits in with the eclectic spirit of the “crazy Casbah sound”, but also gives an indication as to the somewhat chaotic nature of the Clash gigs at the City Hall. This shambolic impression is reinforced by the band themselves in an interview with the contemporary local Newcastle fanzine Eccentric Sleeve Notes, now available online. Sadly, no details of the support band are mentioned here either, however, but the downbeat atmosphere of the gig comes through, with Strummer admitting “We want to make the gig more fun for the audience. Like, it didn’t go down well tonight….It’s seats…The car broke down today and the soundcheck was f---ed. It was such a crap show …tonight we didn’t feel like it.”” ESN editor (and interviewer/reviewer for that article) Simon McKay states that “The Clash musically were unstable”, with recently reinstated drummer Terry Chimes (replacing Topper Headon who had suddenly left the band owing to his own ongoing health issues) having to be “coached along”. 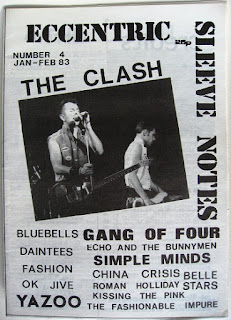 I contacted Simon to see what he could remember of the gigs, in the vain hope that TSOM might have been the support act on the first night, but again there was bad news : “There might have been local supports on those nights. Not Sisters though. The only time I saw them was at Leeds Warehouse in July 1981 immediately after I'd seen Iggy at Leeds University. Not a night to forget!” This confirmation from someone who had already seen the band seemed to be the end of the trail…until long-standing fan Paul Wallace, who had been so helpful on earlier posts on this blog, offered his assistance by getting in touch with some of his long list of contacts. The first attempt just led straight back to Nod the Geordie Poet (just two degrees of separation!), who again kindly confirmed what he had told me earlier in the week (although he must have been bemused at suddenly getting the same obscure query twice in a week some thirty-four years later!). The second, who was sadly away in the States at the time of the Clash gigs, turned out to be none other than North-East demi-god Mensi from the North East’s late 70s/early 80s punk sensations Angelic Upstarts, but with the third, a merchandiser called Hendy, he hit gold.

Incredibly, Hendy confirmed that he had been at both Clash gigs…and that The Sisters of Mercy were definitely the support on the first night. “I was in front row, on the guest list, along with other kids who’d gone to the sound-check for signatures,” he told me. “The Sisters were unrecognisable from the band they became though & I must admit I didn`t know who they were at the time but a handful of people did. I remember one of the members of the band was very nerdy with big plastic spectacles. A few people got down the front and stood at the stage for their slot but in general not a lot of folk knew who they were.” Definitive proof then, from a reliable eye-witness that The Sisters did indeed support The Clash on July 14th, and other members of his friendship group have confirmed that it was indeed TSOM who played that night.

Sadly no further details of the gig (setlist for example) are known, but The Clash remained personal heroes of TSOM, and were cited by both Ben and Gary in an interview with Artificial Life fanzine the following year. Invited to criticise The Clash for “selling out”, Gary told the interviewer “Everybody slags off The Clash but they’ve always had good tunes.” Ben adds, “They still write great songs. “Combat Rock” was brilliant, with songs like “Rock the Casbah” [ironically mostly written by Headon] and “Should I Stay or Should I Go?”” The latter two songs from 1982’s “Combat Rock” LP did indeed relaunch the band’s career, but at the time of the Newcastle gigs neither had yet been released, and The Clash seemed to be going through a terminal decline. Nevertheless, supporting the biggest remaining name in the punk movement in a major provincial venue in front of a large crowd was another major achievement for the Sisters, although they themselves would be headlining the grandest of Britain’s concert venues, London’s Royal Albert Hall, fewer than three years later.

I would like to thank all who have helped with this particular post, particularly “Nod”, Simon, and especially Paul Wallace and Hendy, all of whom were only too happy to give full and prompt answers to my questions Thanks to their contributions, another Sisters Mystery can finally be resolved.

Posted by Nikolas Vitus Lagartija at 08:36