The events of Autumn 1983 have always been one of the murkier periods of TSOM’s past, as the band’s first stable line-up imploded just as (I believe) they stood at the threshold of greatness, with the Temple of Love 12” EP about to be released and the first European and US dates having been an unqualified success. However, Ben Gunn’s sudden departure after the East Coast US dates threw all plans into confusion, and for decades opinion was divided as to whether certain gigs even took place at all.


One such concert was that at Stockholm’s Electric Garden on October 26th 1983, sandwiched as it appeared to be between the dates in New York and Philly and those at SF and LA at the end of the month. Despite the existence of a bootleg seemingly recorded at the gig, which first reached wider circulation many years after the concert itself there was much debate as to whether this was actually recorded in Scandinavia at all, or at a different date in the UK, despite the very obviously Swedish chatter amongst the crowd near the taper (apparently a young man called Mats). 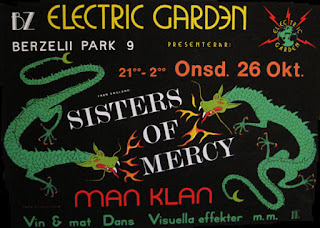 However, a variety of comparatively recent revelations have enabled us to recreate the events of the gig, very probably the first to be undertaken as a three piece in the hiatus between Gunn’s departure and Hussey’s arrival. Six years ago, a newarchive website appeared devoted to the Electric Garden, a club night which was a moveable feast, taking in various Stockholm locations in the early 80’s promoting top independent talent, driven by genial Irishman Harry Byrne who had settled in the city. Like many other such operations across Europe, the Electric Garden was very much a cottage industry, designing and producing their own posters which would be silk screen printed and then flyposted around the Swedish capital (allegedly by Byrne himself). The poster for the Sisters gig was very much in the house style, and is nearly identical in design to that of the next single of the support band, local Stockholm band Man Klan, when Electric Garden branched out into label management the following year. 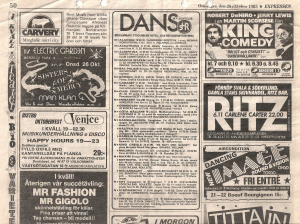 The gig was also advertised in the local press, as this newspaper extract also taken from the Electric Garden archive site will testify, and was one of a shortlived Electric Garden residency at the very posh BZ nightclub, housed on the penthouse floor of the building which to this day also hosts the China Theatre. 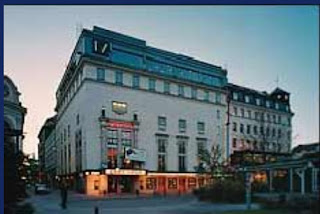 The state of the art BZ (Berzelii Terrassen) club not only featured glass walls, but a retractable ceiling, allowing the well-heeled weekend punters to dance under the stars (or snow), and its low stage can allegedly be seen in the video to ABBA’s legendary Dancing Queen, which it is claimed was shot at the location some years earlier, testament to the venue’s status amongst the Nordic elite (or possibly not, as other accounts state that Dancing Queen was actually filmed at the city’s Alexandra club). 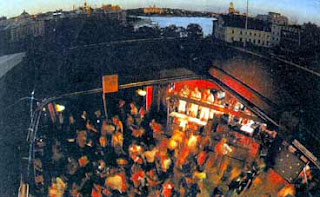 Further revelations came about in comments underneath a post in a Swedish blog“dropsofdew” about TSOM’s gig in Stockholm in 1985. One correspondent, “Bladerunner”, confirmed that he had been at the earlier Electric Garden gig – “a really good show”, and told an amusing tale of how his girlfriend had wanted to change seats at the bar because she felt uncomfortable because of a “sleazy guy” standing behind her. The gentleman in question of course turned out to be Von. “Bladerunner” had watched the whole show side on, and “I noted that Doktor Avalanche” was replaced by cassette tape …for every song played the cassette was changed so that the correct pre-recorded drum sound played back.”


This version of events was confirmed by a further commenter who was a member of the support act Man Klan. “The Sisters played on our equipment! They also helped to lug it through the town, super quiet dudes that you could hang out with backstage before and after the concert. I got a ride home in their limo and a case of beer.  Indeed, Andrew had no drum machine, but everything was on tape (a Nakamichi tape player).”
Fortunately the gig was recorded for posterity and is widely available amongst fans, making it onto a vinyl LP (minus Emma and Adrenochrome) entitled Electric Garden. Considering that they were one guitarist down, the sound remains relatively full, and the version of Temple of Love is arguably the best recorded around that time. The gig is probably best remembered for some of Von’s inter-song banter as the tapes are regularly changed in the makeshift Doktor. Swedish punter : “Where’s the drummer ?” Von : “He’s in the box. (affects voice of character of the then current American cult horror film Basket Case) What’s in the basket ?”. Later in the gig (between Adrenochrome and Floorshow), Von refers to the fact that they will soon be up to the full complement of band members, Hussey having already agreed to join the band following his own departure from Dead or Alive. “We’ve got a new guitarist who can’t be with us today, so next time we’ll be four people. …This is called “Floorshow” and it’s bloody good!” We can all now enjoy this particular section of the gig, as the ever generous Phil Verne has kindlyuploaded it to YouTube. Eldritch is in particularly fine form during this gig, although some fans find the “taped” Doktor somewhat intrusive and lacking in crispness. However, the positive side of the lack of a second guitarist is that Craig’s pulsating bass is also considerably higher in the mix, particularly in songs like “Emma” and “Anaconda”. After a punishing “Body Electric”, the band return for an unlikely encore of “Kiss The Carpet” (“Burn” having started the set), with “Alice” (Marx coping admirably with the even more exposed solo) and a rare second encore, in this case Sister Ray. 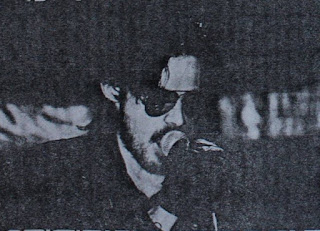 The gig was also reviewed as part of an interview (with photos) in the Swedish fanzine Kemisk Afton (issue three from Feb 1984), with writer Sven-Eric Nilsson stating “Which are your influences? Andrew:  -Early 70´s bands from the us like MC5. Music that's "loud funny and cheap". The Sisters of Mercy themselves fulfil these three criteria when you see them live and despite the fact that just previous to the gig at Electric Garden in Stockholm they had lost one of their guitarists, Ben Gunn, the music had an incredible energy and substance. Andrew leaning over the microphone in his black leather clothes, long hair drenched with gel and sunglasses (you recognize the description…?). Andrew’s incredible and dark voice is unforgettable. On one side of the stage Gary Marx "stands" playing wildly on his guitar, falling and the question is how he manages to play the right chord. After a while you realize he's not always hitting the right chord. On the other side is stands Craig Adams, that also nurses the drum-machine Doctor Avalanche, calm and almost childish.” As can be seen from the photos, this gig also saw the debut of the infamous Eldritch beard (his own ABBA tribute?), seen in the same straggly state the later in the same week in the US and in much bushier form at Wayne’s debut the following April as the band resumed live duties.

For the purposes of this blog entry, I tracked down the gig promoter, Harry Byrne, “Mr Electric Garden” and asked him for his own reminiscences, and he very kindly got back to me, saying that he had heard that there was a bootleg in existence and that he had kept his interest in the band. “I did a Sisters show a couple of years ago, on their last Euro tour”, he added.
The BZ club continued to thrive until its closure and demolition as part of a wider refurbishment of the area in 1999, although the Electric Garden moved on again shortly after TSOM’s gig and took up residence at new premises at Wavel.

As usual this blog post is the work of many individuals, and I would like to acknowledge and thank not only Harry Byrne for taking the time and trouble to respond to my enquiries, but also LG who owns a copy of both the poster and the fanzine, Phil Verne for allowing me to hear his excellent copy of the gig and for uploading a video onto YouTube, and on this occasion Swedish superfan “Drsisters” (Anders) for the various translations, tips and snippets of information about a gig he has himself researched for many years. My grateful thanks to you all.

Posted by Nikolas Vitus Lagartija at 13:42