Leeds may be by some distance the largest city in West Yorkshire, but traditionally the county town and the site of the local cathedral was the “Merrie City” of Wakefield, some nine miles away and now dominated by its much bigger neighbour. TSOM always had a strong following from the area at early gigs (the self-appointed “God Squad”) and Gary Marx has connections with the town, but gigographies of the band list no concerts by the band there, despite persistent rumours to the contrary. Another Sisters Mystery waiting to be solved?
Heartland member PiB, an authority on most things TSOM from the eighties era, states in a discussion thread on the Forum that the “God Squad” were originally roadies and various hangers-on from the town and that TSOM played “at least two secret gigs for them at a pub in Wakefield. It was the pub where they started. I do know for definite that there was a gig at the Hellfire Club, before the Reptile House tour, and that a tape exists.”


All this remained the second-hand reporting of an ex-roadie’s reminiscences until a few weeks ago, when new Heartland member Poisonheart (describing himself as a “citizen of Wakefield”, a phrase often used by Eldritch to describe the followers back in the day – see the mention on the label of the 7” of 1983’s Temple of Love – “Thanks to Pontiac (Detroit) and the Citizens of Wakefield”) on mentioning how much he’d enjoyed the recent (October 2015)Manchester gig by the current line-up, the first time he’d seen the band since ’84 having increasingly lost interest after the release of The Reptile House EP. Astonishingly, in response to further posts he then revealed, almost en passant, “I’d also swear that I saw the band in Wakefield [in addition to early Leeds gigs], but can’t be 100% on that, but if we did I would say The Strafford Arms ?” This would certainly fit in with PiB’s information, but when the latter joined the conversation to suggest “The Hellfire Club” as the venue, Poisonheart agreed that that was indeed most likely the case.

The Hellfire Club was a noted posi-punk/goth club night based at Heppy’s nightclub, a somewhat unusual venue in the town. Situated in an alleyway off the Bullring, Heppy’s belonged to Frank Hepworth, an old-school nightclub impresario and entertainer known (according to his obituary in the Wakefield Express in 2001) for his “madcap anecdotes and exploits” and who sang with his own band The Kalahari Bushmen, a big local draw. 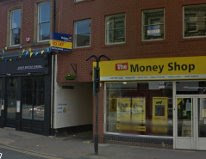 He and some friends had converted an old workshop premises into Heppy’s Fish and Chicken restaurant with a nightclub at the rear in the 1960’s in the town’s Radcliffe Yard, and like many clubs at the time, took advantage of a loophole in the licensing laws which meant that punters who were dining could be served alcohol. Effectively, patrons were given a burger or a bag of chips (which they would often instantly bin) with their entry fee, enabling them to be served alcohol! “I always found it strange walking through the chippy to get into a club,” says Poisonheart “but it was part of its character.” The club had already had success in the late 60’s as The Place, a noted Northern Soul night, and tried its luck again in 1983 with a regular series of gigs promoting the cream of the posi-punk movement.
Test Dept, Virgin Prunes, The Fall (Brix Smith’s first ever gig with the band), Flesh for Lulu and The Meteors are just some of the bands who appeared at the venue (on the now renamed Radcliffe Place), with the latter’s performance video-ed and now available on DVD from Cherry Red, who have placed a couple of extracts on YT which allow us to have some idea of the club’s internal dimensions. The club is also mentioned as a seminal outpost of the nascent gothic movement in a couple of recent publications, Dave Haslam’s history of clubbing “Life After Dark”, which quotes David Peace (author of “The Damned United”) as a regular attender,  and the rather more patchy (and bizarre) history of The Batcave scene written in French by Thierry F. (“Le Boucanier”) who toured the UK with his band, Troops for Tomorrow”. “We loved the Hellfire Club in Wakefield which was even dingier than The Batcave and where they played darker, more obscure goth tracks. They even projected the film “The Evil Dead” behind us on stage whilst we played” (the venue having one of the North’s biggest video screens at the time, used mainly on more regular “meat market” clubbing nights during the rest of the week).

Sadly, as this unfocussed aerial photo proves, like its colourful former owner Heppy’s is no more, being now a car park seen towards the centre of the shot.  But what about TSOM - all that was now needed was to ascertain a definitive date for the early Wakefield gig, apparently in Spring 1983. Enter another Sisters veteran fan, one of the founder members of “The God Squad”, “a name that started in Wakefield in early 1983. There were only a few of us at first, but many other people became involved,” he told revered Sisters archivist Phil Verne. Bad news was to follow : “I do not remember the Sisters playing a gig in Wakefield between 1982 and 1984…A few of us used to take turns to DJ at The Hellfire Club. For one night a week we would help convert the club into an indie venue. We had a huge camouflage net that we fixed to the roof and played “horror” videos on the big screen…We were lucky enough to find a copy of “The Evil Dead” before it was censored…. Many bands played there, Gene Loves Jezebel, Living in Texas, 1919 etc…but I am pretty sure that neither the Sisters nor the Violets ever played there. There was quite a bit of damage at the club after one of The Meteors’ gigs, and the owner was not very happy!!! So it was like the beginning of the end of the club.”

This authoritative account is surely also the beginning of the end for this Sisters mystery … unless anyone can prove otherwise?

As usual, many thanks to all who have provided information for this post, including the anonymous veteran Sisters fan, Poisonheart, PiB, Phil Verne and others. Thank you for your generosity in sharing your memories.

Posted by Nikolas Vitus Lagartija at 11:36