It’s hard enough researching gigs from 1983 which one didn’t personally attend when there is ample evidence that they took place and when they are listed in the Gigography on the venerable Sisters wiki, but it’s doubly hard when all of the evidence points to the fact that the gig did not, in fact take place.

Such seemed to be the case for the TSOM gig which allegedly took place at the Sheffield branch of the short-lived Dingwalls chain in the spring of 1983 when the band were on the road to showcase their new material from The Reptile House EP.

A Sheffield Dingwalls advert surfaced some years ago which seemed to indicate a new date on the joint Gun Club/TSOM tour of Saturday 23rd April ’83, but this turned out to be false trail, as that gig never took place, and instead the Sisters appeared at the Peterborough Technical College on that night, a gig that was filmed and where the incendiary nature of the band’s performance and the audience’s enthusiastic response have resulted in that show having a special place in the hearts of all those who hold Gunn era Sisters dear. Further confusion arose when a tape purporting from a Sheffield Dingwalls gig began to circulate, but unfortunately this turned out to be a simple case of mis-labelling (either accidental or, for financial gain, deliberate), with the contents simply the same as those of the Hull Dingwalls gig of July 1st that year, a disappointing experience with which hardy collectors become depressingly over-familiar.
The trail seemed to have reached a dead end, especially as there is a well-known further Sheffield appearance during the never-ending early 1983 tour, the free gig at the university which I myself attended and which is covered in an earlier post on this blog. At that gig though, Eldritch’s first comment to the crowd is “Back in smelly city,” implying that the band had indeed paid a recent visit to the former steel capital of the world, whereas according to all published gigographies this would have been their first visit to Sheffield. 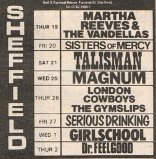 Then in 2012 a website devoted to (of all things) the Evesham legend The Dancing Did turned up this advert from the NME in May 1983, revealing a hastily rearranged gig for TSOM at the Sheffield Dingwalls venue on Friday 20th, an easy nip down the M1 for a quick weekend cash-fix for the band, and a guaranteed decent turn-out at short notice for the already struggling Dingwalls.

A further poster (owned by legendary collector LG and lent by him with typical generosity for this blog post) confirms this date, revealing that the Sisters could be seen for the princely sum of just £1.50, the same price charged for New Model Army with Joolz as support earlier in the week. An interesting artefact, but hard evidence that the gig took place.

Then last year the indefatigable and tenacious French collector Phil “spiggytapes” Verne revealed on Heartland Forum that he had had correspondence with a Richard N from Wakefield who had been at the Dingwalls gig. “Also I have seen one gig in in Sheffield (Dingwalls?) in late April or May 1983. I remember being there because Andrew and Mark (Gary) allowed to sit back stage during the gig because I was in a car accident a week before. It was also one of the first times that the Sisters had a proper merchandise stall at a gig. (Before then, we made and printed our own 'Body Electric' T-Shirts),” Richard had told him.
Scanning through an online discussion forum devoted to live music in Sheffield, I have discovered another mention of the gig, amongst a list of shows which the poster saw at Dingwalls ("I remember the gigs at Dingwalls, man the bouncers were rough in there. Saw Bad Brains, Addicts, Big Country, Sisters of Mercy and loads more"):

Even more incredibly, it turns out that photos shared on the Sisters of Mercy FB page by Ali H a couple of years ago are from this gig, and are part of a much larger series of shots which she took on the night. Ali has kindly agreed to me sharing a couple of the shots here, and told me : “I remember it being quite a decent little venue, but with a very small stage, they all seemed so crammed there. The gig wasn’t that full, and I was quite near the front from where I took the photos. The Sisters sounded very good, but I remember Andrew getting very angry with Dok A, and he kepy kicking and hitting him. Whether this solved the problem I have no idea, but he obviously wasn’t happy with something. I thought they were awesome, and in those days you could sit on the edge of the stage with them.” 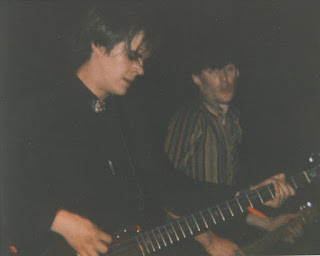 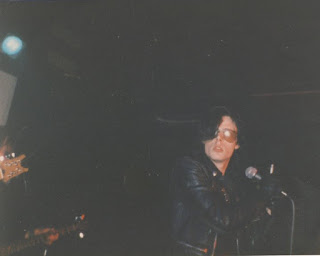 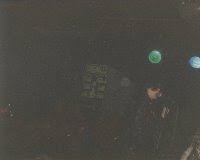 With the emergence of the gig adverts, the eye-witness accounts of Richard N and Ali H (plus her photos) and the recollections of the fan on the Sheffield Forum, there already seems to be more than enough evidence (certainly more than for many others already listed) to reinstate this gig on the official list of TSOM gigs played during the busy halcyon days of 1983. However, the icing on the cake is the existence of an audio recording of the gig, which is easily recognisable as being the Dingwalls show. At the end of the Toy Dolls’ incongruous version of the nursery rhyme “Nellie the Elephant”, the club’s DJ announces to cheers “OK Sheffield, The Sisters of Mercy!” over the instantly recognisable opening drum machine intro to Kiss The Carpet. Richard N will be delighted to recall that Heartland was dedicated "For Wakefield" ( a reward for the God Squad's efforts in coming down the motorway and providing their own unique atmosphere), and the end of the gig is just as memorable, with the clearly still misbehaving Doktor Avalanche (and then the guitar) coming to an end just before Eldritch reaches the crescendo of Sister Ray, leaving the singer to end the song acapella (as he often did for Gimme Shelter), screaming the final “It’s just like Sister Ray said!” in a manner that would have Darth Vader diving for cover, or will be familiar to those who heard his version of "Stop Draggin' My Heart Around".

Like the rest of the chain, the transformation from the Hofbrauhaus Bierkeller to the Sheffield Dingwalls live music venue did not last long, the club closing later in the early summer,  and since then the bar has traded successfully as Berlins and then the gay bar Fuel, but has been closed now for the best part of a decade (blue and white For Sale board visible on the left of this photo). Although listed as being on Furnival St on the original NME advert above, the building where Dingwalls was sited is on a section of that street which was (for obscure reasons) renamed Furnival Gate in the 1990s, and in any case the entrance to Dingwalls was round the corner on Eyre Street, underneath the NCP car park (the lower floors of which can be seen at the top of the picture).

This gig has lain in obscurity for far too long, and I would like to once again acknowledge the incredible generosity of Phil Verne and LG for sharing items from their expensively and lengthily acquired collections with me (and, by extension, the readers of this blog who share our obsession with TSOM 81-85 period, but particularly the first two years). If you have any rare items – especially audio -  from that period, Phil can be contacted at spiggytapes@free.fr ). My thanks for this post also to Richard N, and particularly Ali H for being so patient with all my queries.
Posted by Nikolas Vitus Lagartija at 11:54