A rock and a Paard place

One of the main accusations levelled against the current “live” incarnation of TSOM (apart from the fact that the bass is now also not played live, that there are few new songs and that there is too much dry ice) is that Von now longer sings, he mumbles and growls, to such an extent that it is often difficult to discern anything he is saying. Although fans from the early days will recognise some of these complaints with a wry smile, Eldritch was always very proud of his lyrics and enunciated them very clearly…with one or two famous exceptions. Take A Rock And A Hard Place, for example, and the line “One from the church and the valley of the …”. The valley of the what ???

The emergence of soundboard recordings goes some of the way to resolving some of these issues, and the widely distributed, multi-bootlegged and now freely available recording from the gig at Den Haag’s Paard van Troje venue (A recording often billed as “Live at the Trojan Horse”) is clearer than most in this regard. (2017 update : a fantastic, crystal clear remastered version is now available on Phil Marsh's wonderful "Live and Loud!" blog - complete with a great written intro from veteran Sisters fan Ollie C, based on Phil Verne's master) 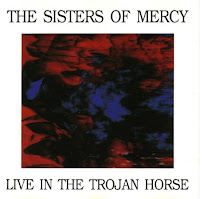 The bootlegs fail to give credit where it is due, and for this as for other Dutch soundboard recordings we must acknowledge the work of Virginia S Y who obtained the relevant permissions to record the gig directly via the mixing desk on a Nakamichi. The gig itself was notable as the band’s first on mainland Europe with Wayne Hussey in the line-up, and was separated from the other Dutch gigs on that tour (detailed elsewhere on this blog) by dates in Germany and Belgium. In interviews within the past decade, Andrew has let it slip that spends much of his time in Holland, by the sea, and there would be few better places to live than the achingly 'hip' historic, administrative and cultural city of Den Haag (known in English as The Hague) and its associated seaside resort Scheveningen.

The Paard van Troje, like the Vera (Groningen), is a venue with a real history which continues to thrive to this day. A former girls boarding school, the venue which opened in 1972 is hidden behind a typically proud stone built façade in Prinsengracht, with the multi-coloured “P” sign the biggest clue to its presence. The date of the Sisters visit was significant for another reason, in that it was also Hussey’s birthday. Whether it was a result of early celebration or his novice status in the band cannot be verified, but certainly the standard of guitar playing was not quite of the standard which we came to expect, notably on Floorshow, Gimme Shelter and Heartland. At one point Hussey cheekily teases the crowd by playing the opening bars of Temple of Love, which famously had not been played live since the previous incarnation of the band, to the delight of the crowd, and Eldritch good-humouredly explains that the guitarist should be indulged because of his birthday!

The singer himself was in fine form, and featuring prominently in the live sound mix, his words can be easily distinguished, allowing a couple of long-standing lyrical conundrums. For example, on Adrenochrome, the 7” studio version seems to trail off after the phrase “for the freedom of…”, and on most live versions Eldritch simply seems to make an “uh” sound. The magnificent Den Haag bootleg however seems to reveal the singer clearly saying the word “stuff” to end the line. Likewise, on this tour the band trialled the new song Walk Away, which was still in its embryonic form at this stage, with Von mumbling the opening verse lyrics as if unsure of them, in a sadly now familiar style. What is clear on this recording (and to a certain extent other recordings of this era) however is that the line that would become “And when the rains comes down" began life as “When the flies come down”, potentially leaving Von in single entendre Kiss The Carpet lyrical mode...

The recording of this gig is a fascinating insight into the band at a crucial moment in their development, with the band's sound fuller and more professional, the guitar lines more intricately delineated, and Eldritch's vocal clearer than ever, and all the more enchantingly vulnerable for it. Although the band can still punk up the older numbers, they retain much of the charm of the earlier incarnation, before pomposity and distance from the audience became more of a norm. 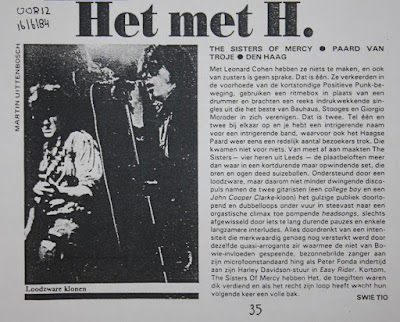 The gig was reviewed in the venerable Dutch rock magazine OOR (and many thanks to the legendary Phil Verne (of the unofficial TSOM 1980-1985 Facebook fan page) once again for allowing me access to his copy), and like many of those on mainland Europe at the time seems more favourable to the band. OOR (Dutch for “EAR”) reviewer Swie Tio says that the gig attracted a “reasonable number of fans…who did not come for nothing” for the band’s “brief but exciting set, steeped in intensity…despite slightly lengthy breaks” ( a phrase which would bring a rye smile to the lips of those who had seen the band the previous year). After comparing the two guitarists to a "college boy and a John Cooper Clarke lookalike", warming to the band’s “heavy but no less compelling discobeat”, the reviewer concludes “The encores were deserved. Next time there will be a full house. To sum up, the Sisters have got “it””. Amen to that.

My thanks for this post are due to Phil V, Ollie C, Phil M, Virginia SY and all others who have helped to preserve the sound and image of TSOM at their peak.

Posted by Nikolas Vitus Lagartija at 12:28