There are many TSOM gigs which I would loved to have attended in the early 80s, but the one at Nijmegen in 1984 would probably have been more interesting than most, as the recording of this gig is regularly mentioned by connoisseurs as being amongst the best live Sisters bootlegs around.

If you arrive in that picturesque Southern Dutch city by train, just opposite the Central Station you will see an impressive piece of modern architecture which houses a vibrant arts centre, and bearing the legend Doornroosje, the name of the venue where the Sisters played that legendary evening back in Spring 1984.

Doornroosje, pronounced not unlike the name of the Neff’s first album, translates directly as “Thorn rose”(“Rose thorn”), and is the Dutch name for the eponymous heroine in the fairytale known in the English-speaking world as “Sleeping Beauty”. Closer inspection however will reveal that this swanky arts complex near the station only opened in 2014, and for the old venue one has to travel into the city’s southern suburbs, to a tranquil road named “Green Woods Way” (“Groenewoudseweg”), keeping the fairy tale theme going. 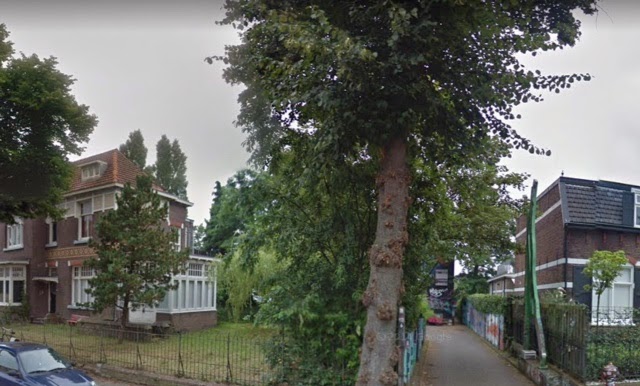 This photo purloined from Google Street View continues the idyllic theme. Two beautiful stout, respectable Dutch homes of the classic early twentieth style confirm the impression of a very well-to-do neighbourhood, but look closely down the heavily graffiti’ed  path between them to glimpse the front of a building which was once the local school, but became the home of the Doornroosje arts collective. According to Dutch Wikipedia it was “a gathering place for hippies” and “one of the first places in the Netherlands where hashish and marijuana were openly available”. This may explain not only the amazing popularity of this provincial venue with touring bands, but TSOM’s performance on the night of 5th June 1984, where according to one YouTuber, “Andrew Eldritch is chewing his face off in a moment of complete whizzadry (sic)”.

Von was certainly in good form that night, enjoying the inter-song banter with the audience, including a female heckler put-down which would not have been out of place in Bernard Manning’s Embassy Club : “Listen, love, we’ll do the show, you just do the clapping,” but the gig is best remembered for its lengthy and wild encore, which consisted of a nine minute Sister Ray, Fix, and then a seventeen minute Ghostrider/Louie Louie to round things off. Fortunately, the gig was recorded for posterity and shared amongst the Sisterhood.

The original Doornroosje is currently being used on an ad hoc basis as a rehearsal and recording space by local indie bands, with plans to make this a more permanent arrangement now in place, a fitting new role for this unique venue which is remembered with affection way beyond Gelderland.

Posted by Nikolas Vitus Lagartija at 04:49