Thirty-five years ago today, The Sisters of Mercy played their first gig of the crucial year (for them) of 1983 at The Manhattan Club in Bradford. Or perhaps thirty-five years ago yesterday. I don't know for sure, to misquote Albert Camus, but we will return to the issue of the exact date later in the post.


Although only a week after the 26th December 1982 "Christmas on Earth" gig in front of a large and appreciative audience at the London Lyceum at the end of their run of shows in the capital to round off their breakthrough year on a high, it seems to have been a much more focused and slick Sisters who took to the stage of the more modest Manhattan Club in Bradford just a few days into the New Year in 1983. With the students of Bradford and Leeds yet to return to their garrets, and with local punters watching their pennies with the long and impecunious month of January stretching ahead, there must have been a relatively small crowd in the Manhattan that evening early in the first week of the year, judging by the size of the audience response between tracks on the audio recording of the gig, both on the "Rough Diamonds" bootleg LP and on the various cassette recordings which have emerged.


The Manhattan gig opens with a confident "Kiss The Carpet", the instrumental opening lasting a full two and a half minutes of intertwining bass and guitars, unlike the more chaotic versions of the previous fortnight in London. Unfortunately, as the main guitar riff kicks in just before Eldritch joins the fray, the lead guitar sound is lost for a few seconds, either because Gary selected the wrong pedal or because of an error on the mixing desk. "We're lost in the room ... (Inaudible)" states Eldritch at the end of the song in his only onstage comment of note during the entire set, another indication that the band are taking the gig seriously as a statement of intent for the year ahead. After a short Doktor misfire (with a random extra bar of "Kiss The Carpet"), the band tear into "Floorshow", which like several later tracks (e.g. an equally excellent "Adrenochrome" which follows) features Ben's guitar prominently in the mix, with a reverb-heavy Eldritch somewhat less dominant than usual. Keeping the singles flowing, the band then go (after the briefest of guitar tune-ups) into a near-perfect version of "Alice", with Marx again showing total mastery of the repeated main riff which had caused such problems on the Autumn 1982 tour with the Furs. Whereas later in 1983 the band would introduce a cover at this point ("Jolene" or "Emma"), in this transitional phase between the punkier 1982 set and the smoother Spring/Summer 1983 selection of songs, the Sisters continue with an up-tempo version of "Watch", one of the last half-dozen outings for the debut single which would soon be disowned in interviews, but it gets one of the best audience reactions here. It was of course much different from the original vinyl version, with none of the features of the lengthy "live" ending, i.e. Craig Adams' buzzing bass, Eldritch's histrionic vocal, and Doktor Avalanche's clinical backbeat havig featured on the "Damage Done" double A side. The pace slows further with the northern debut of "Valentine", which still features the "hollow faces"/"empty smiles" lyrical transposition in the final verse at this stage, before quickening again with the soon-to-be-released "Anaconda", with Eldritch opting to sing the middle verse an octave higher than usual and missing out many of the "she will"s, possibly indicating that his voice was not at its best that evening. Most recordings of the gig omit the next track, "Body Electric", which is a shame as it is a particularly intense version, quickly followed by the usual set-closer "Sister Ray", which after a very haphazard low-key start is soon running at full octane. A relatively brief set all in all, three songs shorter than the Leeds Warehouse show a fortnight later (another indication that someone in the band was not feeling 100% ?), but certainly one of the most technically competent of that era. 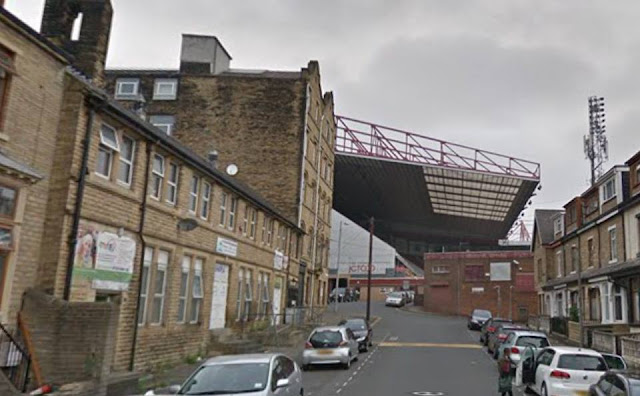 The Manhattan Club was a most unlikely looking venue on a suburban street in the Manningham district of Bradford called Cornwall Terrace. As can be seen in the Google photo here, the street is currently very much in the overhanging shadow of the main stand of Valley Parade Stadium, home of Bradford City FC, although back in 1983 the stand was a significantly smaller wooden framed structure dating back to the turn of the century. That stand would be tragically engulfed in flames in May 1985 during a match between Bradford City and Lincoln City in a catastrophe that cost the lives of fifty-six supporters, in the very same month as the Heysel disaster. The Manhattan Club was housed in the run of two-storey buildings on the immediate left hand side of the street, currently trading as a sort of community learning centre.

Back in early 1983, the Manhattan hosted a series of indie gigs of which the Sisters was the first, and I remember having a flyer for the gigs posted on the pinboard of the kitchen of my student flat in Leeds at the time. If memory serves (and it will have to, as I haven't seen the flyer since those days) it made mention of the forthcoming "Anaconda" single and was one of those information-packed hand-written flyers which makes me think that Nick Toczek was probably the promoter. Internet searches reveal photos of The Cocteau Twins and The Fall from subsequent gigs in the series at the Manhattan (check out the purple curtain to the side of the stage to prove that these are from the same venue, as the Fall ones are erroneously listed as being taken at the 1 in 12 Club, a venue that didn't start promoting gigs until later that year) on Monday 10th January and Monday 17th January 1983 respectively. Given that Sex Gang Children also played the Manhattan on a Monday the following month, it seems reasonable to assume that the date of the Sisters gig was also a Monday, as promoters usually block-booked a venue for the same night every week with a club owner, which also had the advantage of building customer loyalty, which would make it the 3rd of January rather than Tuesday 4th January which is usually the date given for this concert (on the band's and on the Sisters wiki's gigographies, for example).  I discussed this possibility with well-known TSOM live audio cassette expert Phil Verne, and he revealed that he has seen both dates listed on inserts of cassette recordings of the show, but that the earliest generation tape in his possession lists the date as the 3rd of January.

Whatever the date, anyone who has heard the Manhattan show can be in no doubt that the band were now a live force to be reckoned with, thanks to an increasingly tight and well-paced set with fewer technical difficulties and limitations. The band was clearly now ready to move on to the next phase of development, from one-hit indie chart wonders to a potential stadium band.

If anyone can shed any further light on this gig, whether personal reminiscences, a flyer/poster/ticket, photos etc, then we would love to hear from you over on The Sisters of Mercy unofficial Fan Club Facebook page for the 1980-1985 era.

My grateful thanks for their help with this post are due to Phil V, LG, "Circle", archivists of The Fall and Cocteau Twins and others.

Posted by nikolas vitus lagartija at 07:41