One of the major perceived factors in the band’s major split of 1985 was the future musical direction of the band, and in this post I will examine the complex and multifarious strands of what can, on the surface, seem to be a simple case of musical differences between the three parties concerned, Eldritch, Marx and the Hussey-Adams pairing.

The extent to which they wished to pursue a “commercial” path, the influence (real or perceived) of the major record company, Eldritch’s natural inclination to control every aspect of the band’s affairs, whether to focus on playing live or recording, health matters, outside relationships, all of these and more were factors in opening up the rift between the different factions which had already developed by the album’s release, as we have seen in earlier posts on the 1985 split here, here and here.

In this post I intend to look at further evidence on these key issues as provided by the band’s responses in various interviews during the Spring 1985 tours in the UK, Europe and America. Although the album First and Last and Always had already sold 50,000 copies in the UK by the time the band completed the Armageddon tour, just two months after its release (according to Wayne Hussey at the Stockholm press conference in May 1985), having reached the UK Official Top Twenty album chart, the lack of a breakthrough single (Body and Soul and Walk Away having reached the 40s but No Time To Cry only reaching no. 63 despite the new b-sides) was beginning to weigh more heavily on the band than one might initially imagine.

There certainly seemed to be pressure on the band to release a cover version of Emma as a single, and the band as a three-piece did record studio versions of both the former Hot Chocolate classic and another favourite cover Knockin’ on Heaven’s Door in June 1985. As mentioned in the previous post, Eldritch had stated in the Rockpool magazine interview in June 1985 that the band were going to record a studio version of the song which had caused such a stir on the John Peel radio show when recorded as a session track :

When and how this was going to be released however, is unclear, although a bootleg (demo?) version of that June 1985 recording of Emma did indeed surface. In interviews, the band had always stressed that they would not countenance putting a cover on the A-side of a single as a shortcut to making the breakthrough, as Bauhaus (Ziggy Stardust - which reached number 15) had done in similar circumstances (The Passion of Lovers, Spirit and Kick in the Eye - twice - had all reached the top 60 but failed the dent the all-important Official Top Forty).

This was discussed by both Hussey (who, interestingly, seems more ambivalent as his answer develops) and Eldritch (who has the terse, final word) in this extract from The Day of the Raygun Cometh fanzine :

Question : “Would you ever go for a recognisable cover to give you that extra push into the charts?”
Wayne : “We have recorded covers. We wanna be successful but if it boiled down to the situation where if we did a certain cover version we would have a hit single, then no. If it was a song that we really liked and enjoyed playing and we could make a good record out of it, then yeah. It’s like “Emma”, I’m sure if we recorded and released that, it would be quite successful. If we were gonna make records purely for the money we wouldn’t be making the records we’re making. I don’t actually think that we could make a record just for the money.


Andrew : We’ve never put a cover on the main side 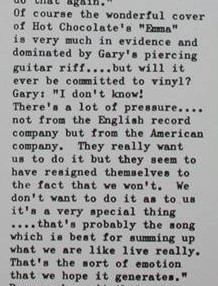 Gary Marx had also referred to this issue in the Artificial Life interview (above) in March 1985, stressing that Elektra were particularly keen to see Emma released, as a way to “break” the band Stateside, clearly a key ambition of the band’s at the time, given the frequency of their visits there (October 83, April 84, August 84, May/June 85), and Eldritch’s comments to Rockpool magazine (June 1985) about the American label show that their influence was growing on the band, although the singer clearly had strong ideas about the extent to which Elektra's influence should go ("It's promotion, not guidance, we're looking for.
"). 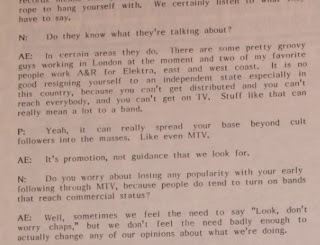 The end section of the above extract emphasises the point that not only had the band failed to make the expected breakthrough in terms of single sales, but the band seemed to be stalling as a live draw, with older fans deserting the band (guilty as charged, m’lud) in smaller but not totally dissimilar numbers to those of new fans attracted to the band, a point which was discussed in the Piccadilly Radio interview in Manchester in March 1985 :

WH - the venues we’re playing on this tour are very similar to the ones we did on the last tour. We’re getting a few more people in, but I don’t think we’re not ready to go onto the big, big venues just yet.
Q – A lot of the elitism has disappeared out of music over the last four to five years, musicians in the days of the Clash will never do Top of The Pops.
WH - I think the elitism has disappeared with the musicians, but I think that it’s still there a lot with t’fans
AE -  A lot of the people we play to have got a lot of prejudices about people like WEA being involved and giving us money, putting glossy covers on records and stuff like that, it sort of offends them somehow, but they don’t realise that neither the Sex Pistols nor the Clash ever put out a record on an independent label…After so many years of maybe seeming to pander to that mentality, and after so many years of not really getting anywhere by way of rewarding ourselves, we’ve stopped taking [them] into account altogether now and if they have a problem with that I’m afraid it’s their problem.
Q – At the end of the day, they don’t own The Sisters of Mercy, and they’d be the first to complain if they couldn’t buy your records, which is what happens when a band reaches a certain level
AE – Absolutely, absolutely

The band’s frustration is evident in their responses, as they audibly warm to the interviewer who can clearly empathise with their situation. The departure of Gary Marx was likely to alienate further some of the remaining hardcore faithful, with no guarantee that a more commercial sound would recruit a similarly devoted following, as other bands (The Danse Society, The March Violets and, ironically, Gary Marx’s Ghost Dance project) would discover. In one of the Stockholm interviews one month before the Wake finale, Eldritch clearly states that the band had planned to play two nights at the Royal Albert Hall, but with the first show failing to sell out, the second was never announced, symptomatic of the lack of a genuine breakthrough which both band and record company had been expecting.
That these would be the final concerts for a long time seems to have been a major influence on Eldritch’s decision making, a fact reiterated in one of the Stockholm 85 interviews. When asked what the plans were for after the American tour which was to follow the Swedish show, Hussey replied, “Have a holiday…and write some new songs.” Eldritch couldn’t help adding “And then have another holiday … and then write some more songs,” clearly not contemplating a live return at all, unlike Hussey’s comment in the Piccadilly Radio interview a month earlier that “we don’t intend to tour again in Britain until at least the autumn by which time we’ll have another single out .” Marx’s stated antipathy to lengthy studio sessions had set him on a clear collision course with Eldritch, and it is clear that Hussey also hankered for a “live” return after only a few months away from the road, another pressure driving the pair apart.
As stated in the introduction to this post, the comparative lack of progress in commercial terms in the FALAA era, with the band failing to reap the rewards which their herculean efforts deserved, was but one aspect in a “perfect storm” of factors which conspired to drive the band apart. Whilst superficial press reports at the time encouraged fans to take sides and blame one member or another for the band’s demise, having examined the vast amount of evidence available to the inveterate interview consumer, it is clear to me that Marx, Hussey, Eldritch and Adams were all simply (in the words of the bootleg compilation of their unfinished business from this era) ... Victims of Circumstance.

For this latest post, my grateful thanks are due as ever to the kind collectors who have shared items from their collections with me, particularly LG and the incomparable Phil Verne, founder and curator of the wonderful (and now six thousand members strong) unofficial Facebook group The Sisters of Mercy 1980 -1985, where many extraordinary items from that era are regularly revealed and discussed

Posted by nikolas vitus lagartija at 08:07